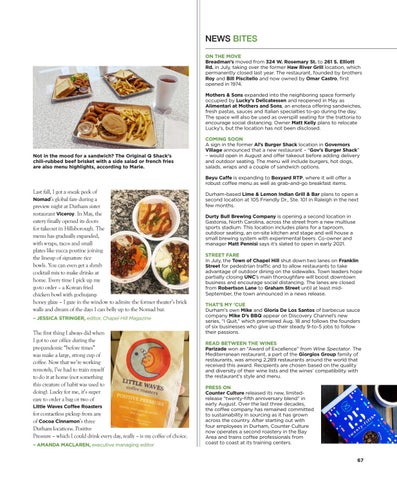 NEWS BITES ON THE MOVE Breadman’s moved from 324 W. Rosemary St. to 261 S. Elliott Rd. in July, taking over the former Haw River Grill location, which permanently closed last year. The restaurant, founded by brothers Roy and Bill Piscitello and now owned by Omar Castro, first opened in 1974. Mothers & Sons expanded into the neighboring space formerly occupied by Lucky’s Delicatessen and reopened in May as Alimentari at Mothers and Sons, an enoteca offering sandwiches, fresh pastas, sauces and Italian specialties to-go during the day. The space will also be used as overspill seating for the trattoria to encourage social distancing. Owner Matt Kelly plans to relocate Lucky’s, but the location has not been disclosed.

Not in the mood for a sandwich? The Original Q Shack’s chili-rubbed beef brisket with a side salad or french fries are also menu highlights, according to Marie.

COMING SOON A sign in the former Al’s Burger Shack location in Governors Village announced that a new restaurant – “Gov’s Burger Shack” – would open in August and offer takeout before adding delivery and outdoor seating. The menu will include burgers, hot dogs, salads, wraps and a couple of sandwich options. Beyu Caffe is expanding to Boxyard RTP, where it will offer a robust coffee menu as well as grab-and-go breakfast items.

Last fall, I got a sneak peek of Nomad’s global fare during a preview night at Durham sister restaurant Viceroy. In May, the eatery finally opened its doors for takeout in Hillsborough. The menu has gradually expanded, with wraps, tacos and small plates like yucca poutine joining the lineup of signature rice bowls. You can even get a shrub cocktail mix to make drinks at home. Every time I pick up my go-to order – a Korean fried chicken bowl with gochujanghoney glaze – I gaze in the window to admire the former theater’s brick walls and dream of the days I can belly up to the Nomad bar. – JESSICA STRINGER, editor, Chapel Hill Magazine

The first thing I always did when I got to our office during the pre-pandemic “before times” was make a large, strong cup of coffee. Now that we’re working remotely, I’ve had to train myself to do it at home (not something this creature of habit was used to doing). Lucky for me, it’s super easy to order a bag or two of Little Waves Coffee Roasters

for contactless pickup from any of Cocoa Cinnamon’s three Durham locations. Positive Pressure – which I could drink every day, really – is my coffee of choice. – AMANDA MACLAREN, executive managing editor

Durham-based Lime & Lemon Indian Grill & Bar plans to open a second location at 105 Friendly Dr., Ste. 101 in Raleigh in the next few months. Durty Bull Brewing Company is opening a second location in Gastonia, North Carolina, across the street from a new multiuse sports stadium. This location includes plans for a taproom, outdoor seating, an on-site kitchen and stage and will house a small brewing system with experimental beers. Co-owner and manager Matt Pennisi says it’s slated to open in early 2021. STREET FARE In July, the Town of Chapel Hill shut down two lanes on Franklin Street for pedestrian traffic and to allow restaurants to take advantage of outdoor dining on the sidewalks. Town leaders hope partially closing UNC’s main thoroughfare will boost downtown business and encourage social distancing. The lanes are closed from Robertson Lane to Graham Street until at least midSeptember, the town announced in a news release. THAT’S MY ’CUE Durham’s own Mike and Gloria De Los Santos of barbecue sauce company Mike D’s BBQ appear on Discovery Channel’s new series, “I Quit,” which premiered Aug. 18 and follows the founders of six businesses who give up their steady 9-to-5 jobs to follow their passions. READ BETWEEN THE WINES Parizade won an “Award of Excellence” from Wine Spectator. The Mediterranean restaurant, a part of the Giorgios Group family of restaurants, was among 2,289 restaurants around the world that received this award. Recipients are chosen based on the quality and diversity of their wine lists and the wines’ compatibility with the restaurant’s style and menu. PRESS ON Counter Culture released its new, limitedrelease “twenty-fifth anniversary blend” in early August. Over the last three decades, the coffee company has remained committed to sustainability in sourcing as it has grown across the country. After starting out with four employees in Durham, Counter Culture now operates a second roastery in the Bay Area and trains coffee professionals from coast to coast at its training centers. 67