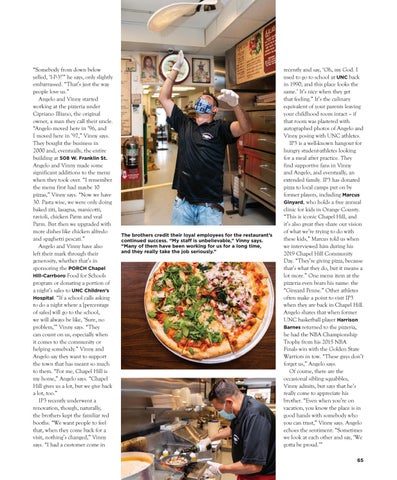 “Somebody from down below yelled, ‘I-P-3!’” he says, only slightly embarrassed. “That’s just the way people love us.” Angelo and Vinny started working at the pizzeria under Cipriano Illiano, the original owner, a man they call their uncle. “Angelo moved here in ’96, and I moved here in ’97,” Vinny says. They bought the business in 2000 and, eventually, the entire building at 508 W. Franklin St. Angelo and Vinny made some significant additions to the menu when they took over. “I remember the menu first had maybe 10 pizzas,” Vinny says. “Now we have 30. Pasta wise, we were only doing baked ziti, lasagna, manicotti, ravioli, chicken Parm and veal Parm. But then we upgraded with more dishes like chicken alfredo and spaghetti pescati.” Angelo and Vinny have also left their mark through their generosity, whether that’s in sponsoring the PORCH Chapel Hill-Carrboro Food for Schools program or donating a portion of a night’s sales to UNC Children’s Hospital. “If a school calls asking to do a night where a [percentage of sales] will go to the school, we will always be like, ‘Sure, no problem,’” Vinny says. “They can count on us, especially when it comes to the community or helping somebody.” Vinny and Angelo say they want to support the town that has meant so much to them. “For me, Chapel Hill is my home,” Angelo says. “Chapel Hill gives us a lot, but we give back a lot, too.” IP3 recently underwent a renovation, though, naturally, the brothers kept the familiar red booths. “We want people to feel that, when they come back for a visit, nothing’s changed,” Vinny says. “I had a customer come in

The brothers credit their loyal employees for the restaurant’s continued success. “My staff is unbelievable,” Vinny says. “Many of them have been working for us for a long time, and they really take the job seriously.”

recently and say, ‘Oh, my God. I used to go to school at UNC back in 1990, and this place looks the same.’ It’s nice when they get that feeling.” It’s the culinary equivalent of your parents leaving your childhood room intact – if that room was plastered with autographed photos of Angelo and Vinny posing with UNC athletes. IP3 is a well-known hangout for hungry student-athletes looking for a meal after practice. They find supportive fans in Vinny and Angelo, and eventually, an extended family. IP3 has donated pizza to local camps put on by former players, including Marcus Ginyard, who holds a free annual clinic for kids in Orange County. “This is iconic Chapel Hill, and it’s also great they share our vision of what we’re trying to do with these kids,” Marcus told us when we interviewed him during his 2019 Chapel Hill Community Day. “They’re giving pizza, because that’s what they do, but it means a lot more.” One menu item at the pizzeria even bears his name: the “Ginyard Penne.” Other athletes often make a point to visit IP3 when they are back in Chapel Hill. Angelo shares that when former UNC basketball player Harrison Barnes returned to the pizzeria, he had the NBA Championship Trophy from his 2015 NBA Finals win with the Golden State Warriors in tow. “These guys don’t forget us,” Angelo says. Of course, there are the occasional sibling squabbles, Vinny admits, but says that he’s really come to appreciate his brother. “Even when you’re on vacation, you know the place is in good hands with somebody who you can trust,” Vinny says. Angelo echoes the sentiment: “Sometimes we look at each other and say, ‘We gotta be proud.’” 65