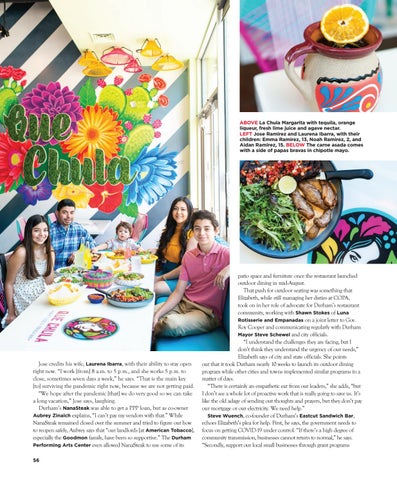 ABOVE La Chula Margarita with tequila, orange liqueur, fresh lime juice and agave nectar. LEFT Jose Ramirez and Laurena Ibarra, with their children: Emma Ramirez, 13, Noah Ramirez, 2, and Aidan Ramirez, 15. BELOW The carne asada comes with a side of papas bravas in chipotle mayo.

Jose credits his wife, Laurena Ibarra, with their ability to stay open right now. “I work [from] 8 a.m. to 5 p.m., and she works 5 p.m. to close, sometimes seven days a week,” he says. “That is the main key [to] surviving the pandemic right now, because we are not getting paid. “We hope after the pandemic [that] we do very good so we can take a long vacation,” Jose says, laughing. Durham’s NanaSteak was able to get a PPP loan, but as co-owner Aubrey Zinaich explains, “I can’t pay my vendors with that.” While NanaSteak remained closed over the summer and tried to figure out how to reopen safely, Aubrey says that “our landlords [at American Tobacco], especially the Goodmon family, have been so supportive.” The Durham Performing Arts Center even allowed NanaSteak to use some of its 56

patio space and furniture once the restaurant launched outdoor dining in mid-August. That push for outdoor seating was something that Elizabeth, while still managing her duties at COPA, took on in her role of advocate for Durham’s restaurant community, working with Shawn Stokes of Luna Rotisserie and Empanadas on a joint letter to Gov. Roy Cooper and communicating regularly with Durham Mayor Steve Schewel and city officials. “I understand the challenges they are facing, but I don’t think they understand the urgency of our needs,” Elizabeth says of city and state officials. She points out that it took Durham nearly 10 weeks to launch its outdoor dining program while other cities and towns implemented similar programs in a matter of days. “There is certainly an empathetic ear from our leaders,” she adds, “but I don’t see a whole lot of proactive work that is really going to save us. It’s like the old adage of sending out thoughts and prayers, but they don’t pay our mortgage or our electricity. We need help.” Steve Wuench, co-founder of Durham’s Eastcut Sandwich Bar, echoes Elizabeth’s plea for help. First, he says, the government needs to focus on getting COVID-19 under control. “If there’s a high degree of community transmission, businesses cannot return to normal,” he says. “Secondly, support our local small businesses through grant programs