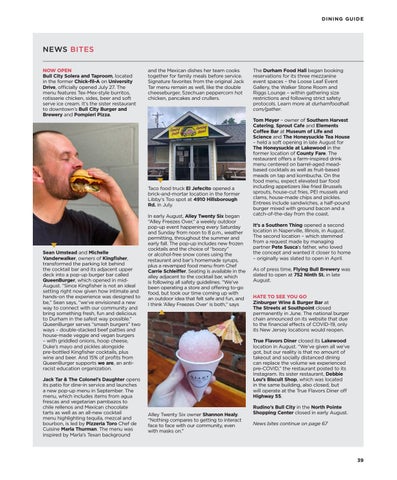 and the Mexican dishes her team cooks together for family meals before service. Signature favorites from the original Jack Tar menu remain as well, like the double cheeseburger, Szechuan peppercorn hot chicken, pancakes and crullers.

Taco food truck El Jefecito opened a brick-and-mortar location in the former Libby’s Too spot at 4910 Hillsborough Rd. in July.

Sean Umstead and Michelle Vanderwalker, owners of Kingfisher, transformed the parking lot behind the cocktail bar and its adjacent upper deck into a pop-up burger bar called QueenBurger, which opened in midAugust. “Since Kingfisher is not an ideal setting right now given how intimate and hands-on the experience was designed to be,” Sean says, “we’ve envisioned a new way to connect with our community and bring something fresh, fun and delicious to Durham in the safest way possible.” QueenBurger serves “smash burgers” two ways – double-stacked beef patties and house-made veggie and vegan burgers – with griddled onions, hoop cheese, Duke’s mayo and pickles alongside pre-bottled Kingfisher cocktails, plus wine and beer. And 15% of profits from QueenBurger supports we are, an antiracist education organization. Jack Tar & The Colonel’s Daughter opens its patio for dine-in service and launches a new pop-up menu in September. The menu, which includes items from agua frescas and vegetarian pambazos to chile rellenos and Mexican chocolate tarts as well as an all-new cocktail menu highlighting tequila, mezcal and bourbon, is led by Pizzeria Toro Chef de Cuisine Marla Thurman. The menu was inspired by Marla’s Texan background

In early August, Alley Twenty Six began “Alley Freezes Over,” a weekly outdoor pop-up event happening every Saturday and Sunday from noon to 8 p.m., ​weather permitting​, throughout the summer and early fall. The pop-up includes new frozen cocktails and the choice of “boozy” or alcohol-free snow cones using the restaurant and bar’s homemade syrups, plus a revamped food menu from Chef Carrie Schleiffer. Seating is available in the alley adjacent to the cocktail bar, which is following all safety guidelines. “We’ve been operating a store and offering to-go food, but took our time coming up with an outdoor idea that felt safe ​and​fun, and I think ‘Alley Freezes Over’ is both,” says

The Durham Food Hall began booking reservations for its three mezzanine event spaces – the Loose Leaf Event Gallery, the Walker Stone Room and Riggs Lounge – within gathering size restrictions and following strict safety protocols. Learn more at durhamfoodhall. com/gather. Tom Meyer – owner of Southern Harvest Catering, Sprout Cafe and Elements Coffee Bar at Museum of Life and Science and The Honeysuckle Tea House – held a soft opening in late August for The Honeysuckle at Lakewood in the former location of County Fare. The restaurant offers a farm-inspired drink menu centered on barrel-aged meadbased cocktails as well as fruit-based meads on tap and kombucha. On the food menu, expect elevated bar food including appetizers like fried Brussels sprouts, house-cut fries, PEI mussels and clams, house-made chips and pickles. Entrees include sandwiches, a half-pound burger mixed with ground bacon and a catch-of-the-day from the coast. It’s a Southern Thing opened a second location in Naperville, Illinois, in August. The second location – which stemmed from a request made by managing partner Pete Susca’s father, who loved the concept and wanted it closer to home – originally was slated to open in April. As of press time, Flying Bull Brewery was slated to open at 752 Ninth St. in late August. HATE TO SEE YOU GO Zinburger Wine & Burger Bar at The Streets at Southpoint closed permanently in June. The national burger chain announced on its website that due to the financial effects of COVID-19, only its New Jersey locations would reopen. True Flavors Diner closed its Lakewood location in August. “We’ve given all we’ve got, but our reality is that no amount of takeout and socially distanced dining can replace the volume we experienced pre-COVID,” the restaurant posted to its Instagram. Its sister restaurant, Debbie Lou’s Biscuit Shop, which was located in the same building, also closed, but will operate at the True Flavors Diner off Highway 55.

Alley Twenty Six owner Shannon Healy. “Nothing compares to getting to interact face to face with our community, even with masks on.”