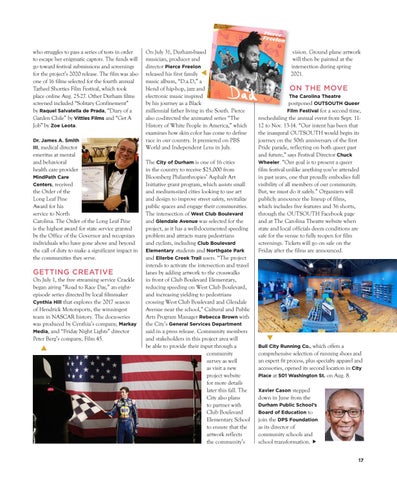 who struggles to pass a series of tests in order to escape her enigmatic captors. The funds will go toward festival submissions and screenings for the project’s 2020 release. The film was also one of 16 films selected for the fourth annual ​ Tarheel Shorties​Film Festival, which took place online Aug. 25-27. Other Durham films screened included “Solitary Confinement​” by Raquel Salvatella de Prada, “Diary of a Garden Chile​” by Vittles Films and “Get A Job​” by Zoe Leota. Dr. James A. Smith III, medical director

On July 31, Durham-based musician, producer and director Pierce Freelon released his first family music album, “D.a.D,” a blend of hip-hop, jazz and electronic music inspired by his journey as a Black millennial father living in the South. Pierce also co-directed the animated series “The History of White People in America,” which examines how skin color has come to define race in our country. It premiered on PBS World and Independent Lens in July. The City of Durham is one of 16 cities in the country to receive $25,000 from Bloomberg Philanthropies’ Asphalt Art Initiative grant program, which assists small and medium-sized cities looking to use art and design to improve street safety, revitalize public spaces and engage their communities. The intersection of West Club Boulevard and Glendale Avenue was selected for the project, as it has a well-documented speeding problem and attracts many pedestrians and cyclists, including Club Boulevard Elementary students and Northgate Park and Ellerbe Creek Trail users. “The project intends to activate the intersection and travel lanes by adding artwork to the crosswalks in front of Club Boulevard Elementary, reducing speeding on West Club Boulevard, and increasing yielding to pedestrians crossing West Club Boulevard and Glendale Avenue near the school,” Cultural and Public Arts Program Manager Rebecca Brown with the City’s General Services Department said in a press release. Community members and stakeholders in this project area will be able to provide their input through a community survey as well as visit a new project website for more details later this fall. The City also plans to partner with Club Boulevard Elementary School to ensure that the artwork reflects the community’s

vision. Ground plane artwork will then be painted at the intersection during spring 2021.

ON THE MOVE The Carolina Theatre postponed OUTSOUTH Queer Film Festival for a second time,

rescheduling the annual event from Sept. 1112 to Nov. 13-14. “Our intent has been that the inaugural OUTSOUTH would begin its journey on the 50th anniversary of the first Pride parade, reflecting on both queer past and future,” says Festival Director Chuck Wheeler. “Our goal is to present a queer film festival unlike anything you’ve attended in past years, one that proudly embodies full visibility of all members of our community. But, we must do it safely.” Organizers will publicly announce the lineup of films, which includes five features and 36 shorts, through the OUTSOUTH Facebook page and at The Carolina Theatre website when state and local officials deem conditions are safe for the venue to fully reopen for film screenings. Tickets will go on sale on the Friday after the films are announced.

comprehensive selection of running shoes and an expert fit process, plus specialty apparel and accessories, opened its second location in City Place at 501 Washington St. on Aug. 8. Xavier Cason stepped

as its director of community schools and school transformation.  17