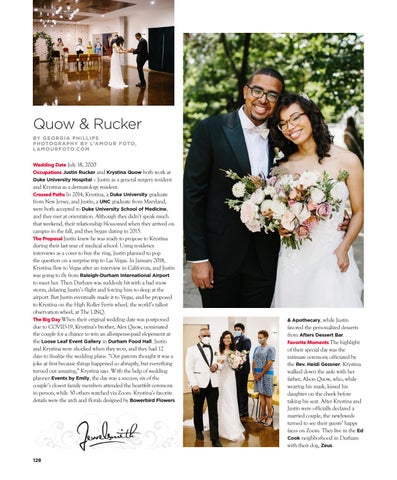 and Krystina as a dermatology resident. Crossed Paths In 2014, Krystina, a Duke University graduate from New Jersey, and Justin, a UNC graduate from Maryland, were both accepted to Duke University School of Medicine, and they met at orientation. Although they didn’t speak much that weekend, their relationship blossomed when they arrived on campus in the fall, and they began dating in 2015. The Proposal Justin knew he was ready to propose to Krystina during their last year of medical school. Using residency interviews as a cover to buy the ring, Justin planned to pop the question on a surprise trip to Las Vegas. In January 2018, Krystina flew to Vegas after an interview in California, and Justin was going to fly from Raleigh-Durham International Airport to meet her. Then Durham was suddenly hit with a bad snow storm, delaying Justin’s flight and forcing him to sleep at the airport. But Justin eventually made it to Vegas, and he proposed to Krystina on the High Roller Ferris wheel, the world’s tallest observation wheel, at The LINQ. The Big Day When their original wedding date was postponed due to COVID-19, Krystina’s brother, Alex Quow, nominated the couple for a chance to win an all-expense-paid elopement at the Loose Leaf Event Gallery in Durham Food Hall. Justin and Krystina were shocked when they won, and they had 12 days to finalize the wedding plans. “Our parents thought it was a joke at first because things happened so abruptly, but everything turned out amazing,” Krystina says. With the help of wedding planner Events by Emily, the day was a success; six of the couple’s closest family members attended the heartfelt ceremony in person, while 30 others watched via Zoom. Krystina’s favorite details were the arch and florals designed by Bowerbird Flowers

favored the personalized desserts from Afters Dessert Bar. Favorite Moments The highlight of their special day was the intimate ceremony officiated by the Rev. Heidi Gessner. Krystina walked down the aisle with her father, Alson Quow, who, while wearing his mask, kissed his daughter on the cheek before taking his seat. After Krystina and Justin were officially declared a married couple, the newlyweds turned to see their guests’ happy faces on Zoom. They live in the Ed Cook neighborhood in Durham with their dog, Zeus.