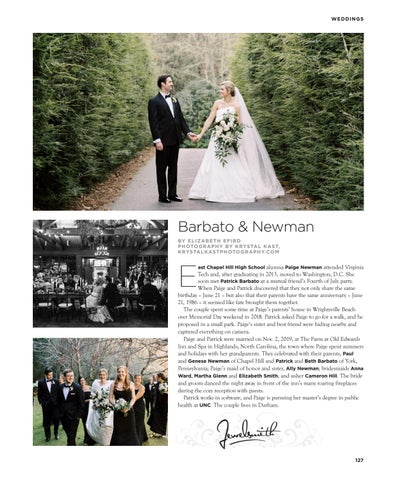 Tech and, after graduating in 2013, moved to Washington, D.C. She soon met Patrick Barbato at a mutual friend’s Fourth of July party. When Paige and Patrick discovered that they not only share the same birthday – June 21 – but also that their parents have the same anniversary – June 21, 1986 – it seemed like fate brought them together. The couple spent some time at Paige’s parents’ house in Wrightsville Beach over Memorial Day weekend in 2018. Patrick asked Paige to go for a walk, and he proposed in a small park. Paige’s sister and best friend were hiding nearby and captured everything on camera. Paige and Patrick were married on Nov. 2, 2019, at The Farm at Old Edwards Inn and Spa in Highlands, North Carolina, the town where Paige spent summers and holidays with her grandparents. They celebrated with their parents, Paul and Genese Newman of Chapel Hill and Patrick and Beth Barbato of York, Pennsylvania; Paige’s maid of honor and sister, Ally Newman; bridesmaids Anna Ward, Martha Glenn and Elizabeth Smith; and usher Cameron Hill. The bride and groom danced the night away in front of the inn’s many roaring fireplaces during the cozy reception with guests. Patrick works in software, and Paige is pursuing her master’s degree in public health at UNC. The couple lives in Durham.