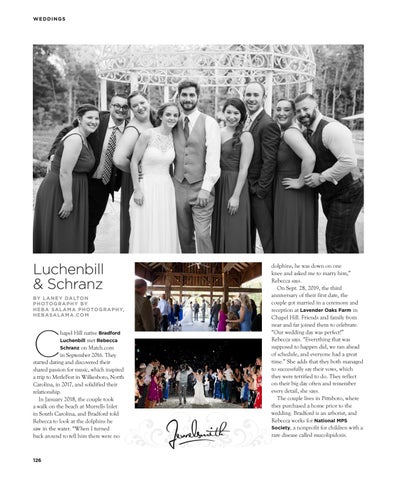 hapel Hill native Bradford Luchenbill met Rebecca Schranz on Match.com in September 2016. They started dating and discovered their shared passion for music, which inspired a trip to MerleFest in Wilkesboro, North Carolina, in 2017, and solidified their relationship. In January 2018, the couple took a walk on the beach at Murrells Inlet in South Carolina, and Bradford told Rebecca to look at the dolphins he saw in the water. “When I turned back around to tell him there were no

dolphins, he was down on one knee and asked me to marry him,” Rebecca says. On Sept. 28, 2019, the third anniversary of their first date, the couple got married in a ceremony and reception at Lavender Oaks Farm in Chapel Hill. Friends and family from near and far joined them to celebrate. “Our wedding day was perfect!” Rebecca says. “Everything that was supposed to happen did, we ran ahead of schedule, and everyone had a great time.” She adds that they both managed to successfully say their vows, which they were terrified to do. They reflect on their big day often and remember every detail, she says. The couple lives in Pittsboro, where they purchased a home prior to the wedding. Bradford is an arborist, and Rebecca works for National MPS Society, a nonprofit for children with a rare disease called mucolipidosis.