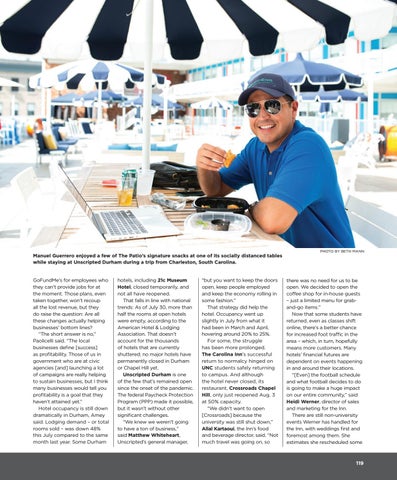 Manuel Guerrero enjoyed a few of The Patio’s signature snacks at one of its socially distanced tables while staying at Unscripted Durham during a trip from Charleston, South Carolina. GoFundMe’s for employees who they can’t provide jobs for at the moment. Those plans, even taken together, won’t recoup all the lost revenue, but they do raise the question: Are all these changes actually helping businesses’ bottom lines? “The short answer is no,” Paolicelli said. “The local businesses define [success] as profitability. Those of us in government who are at civic agencies [and] launching a lot of campaigns are really helping to sustain businesses, but I think many businesses would tell you profitability is a goal that they haven’t attained yet.” Hotel occupancy is still down dramatically in Durham, Amey said. Lodging demand – or total rooms sold – was down 48% this July compared to the same month last year. Some Durham

hotels, including 21c Museum Hotel, closed temporarily, and not all have reopened. That falls in line with national trends: As of July 30, more than half the rooms at open hotels were empty, according to the American Hotel & Lodging Association. That doesn’t account for the thousands of hotels that are currently shuttered; no major hotels have permanently closed in Durham or Chapel Hill yet. Unscripted Durham is one of the few that’s remained open since the onset of the pandemic. The federal Paycheck Protection Program (PPP) made it possible, but it wasn’t without other significant challenges. “We knew we weren’t going to have a ton of business,” said Matthew Whiteheart, Unscripted’s general manager,

“but you want to keep the doors open, keep people employed and keep the economy rolling in some fashion.” That strategy did help the hotel. Occupancy went up slightly in July from what it had been in March and April, hovering around 20% to 25%. For some, the struggle has been more prolonged. The Carolina Inn’s successful return to normalcy hinged on UNC students safely returning to campus. And although the hotel never closed, its restaurant, Crossroads Chapel Hill, only just reopened Aug. 3 at 50% capacity. “We didn’t want to open [Crossroads] because the university was still shut down,” Allal Kartaoui, the Inn’s food and beverage director, said. “Not much travel was going on, so

there was no need for us to be open. We decided to open the coffee shop for in-house guests – just a limited menu for graband-go items.” Now that some students have returned, even as classes shift online, there’s a better chance for increased foot traffic in the area – which, in turn, hopefully means more customers. Many hotels’ financial futures are dependent on events happening in and around their locations. “[Even] the football schedule and what football decides to do is going to make a huge impact on our entire community,” said Heidi Werner, director of sales and marketing for the Inn. There are still non-university events Werner has handled for the Inn, with weddings first and foremost among them. She estimates she rescheduled some