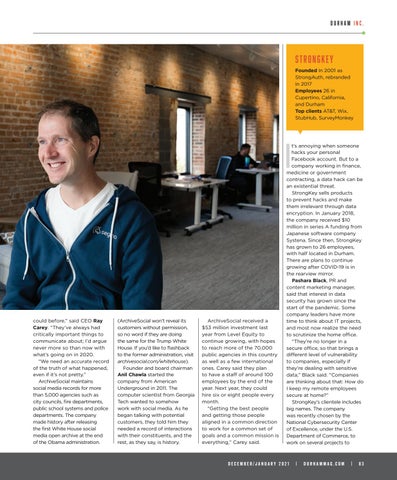 could before,” said CEO Ray Carey. “They’ve always had critically important things to communicate about; I’d argue never more so than now with what’s going on in 2020. “We need an accurate record of the truth of what happened, even if it’s not pretty.” ArchiveSocial maintains social media records for more than 5,000 agencies such as city councils, fire departments, public school systems and police departments. The company made history after releasing the first White House social media open archive at the end of the Obama administration.

(ArchiveSocial won’t reveal its customers without permission, so no word if they are doing the same for the Trump White House. If you’d like to flashback to the former administration, visit archivesocial.com/whitehouse). Founder and board chairman Anil Chawla started the company from American Underground in 2011. The computer scientist from Georgia Tech wanted to somehow work with social media. As he began talking with potential customers, they told him they needed a record of interactions with their constituents, and the rest, as they say, is history.

ArchiveSocial received a $53 million investment last year from Level Equity to continue growing, with hopes to reach more of the 70,000 public agencies in this country as well as a few international ones. Carey said they plan to have a staff of around 100 employees by the end of the year. Next year, they could hire six or eight people every month. “Getting the best people and getting those people aligned in a common direction to work for a common set of goals and a common mission is everything,” Carey said.

t’s annoying when someone hacks your personal Facebook account. But to a company working in finance, medicine or government contracting, a data hack can be an existential threat. StrongKey sells products to prevent hacks and make them irrelevant through data encryption. In January 2018, the company received $10 million in series A funding from Japanese software company Systena. Since then, StrongKey has grown to 26 employees, with half located in Durham. There are plans to continue growing after COVID-19 is in the rearview mirror. Pashara Black, PR and content marketing manager, said that interest in data security has grown since the start of the pandemic. Some company leaders have more time to think about IT projects, and most now realize the need to scrutinize the home office. “They’re no longer in a secure office, so that brings a different level of vulnerability to companies, especially if they’re dealing with sensitive data,” Black said. “Companies are thinking about that: How do I keep my remote employees secure at home?” StrongKey’s clientele includes big names. The company was recently chosen by the National Cybersecurity Center of Excellence, under the U.S. Department of Commerce, to work on several projects to