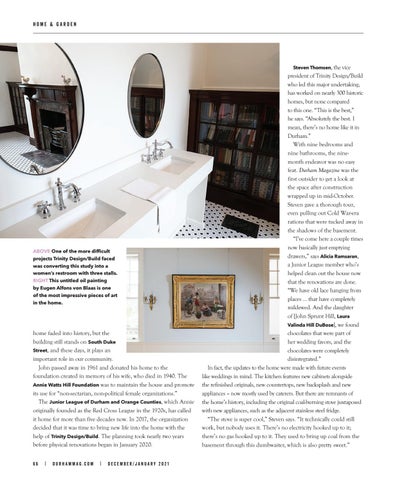 ABOVE One of the more difficult projects Trinity Design/Build faced was converting this study into a women’s restroom with three stalls. RIGHT This untitled oil painting by Eugen Alfons von Blaas is one of the most impressive pieces of art in the home.

home faded into history, but the building still stands on South Duke Street, and these days, it plays an important role in our community. John passed away in 1961 and donated his home to the foundation created in memory of his wife, who died in 1940. The Annie Watts Hill Foundation was to maintain the house and promote its use for “non-sectarian, non-political female organizations.” The Junior League of Durham and Orange Counties, which Annie originally founded as the Red Cross League in the 1920s, has called it home for more than five decades now. In 2017, the organization decided that it was time to bring new life into the home with the help of Trinity Design/Build. The planning took nearly two years before physical renovations began in January 2020. 66

Steven Thomsen, the vice president of Trinity Design/Build who led this major undertaking, has worked on nearly 300 historic homes, but none compared to this one. “This is the best,” he says. “Absolutely the best. I mean, there’s no home like it in Durham.” With nine bedrooms and nine bathrooms, the ninemonth endeavor was no easy feat. Durham Magazine was the first outsider to get a look at the space after construction wrapped up in mid-October. Steven gave a thorough tour, even pulling out Cold War-era rations that were tucked away in the shadows of the basement. “I’ve come here a couple times now basically just emptying drawers,” says Alicia Ramsaran, a Junior League member who’s helped clean out the house now that the renovations are done. “We have old lace hanging from places ... that have completely mildewed. And the daughter of [John Sprunt Hill, Laura Valinda Hill DuBose], we found chocolates that were part of her wedding favors, and the chocolates were completely disintegrated.” In fact, the updates to the home were made with future events like weddings in mind. The kitchen features new cabinets alongside the refinished originals, new countertops, new backsplash and new appliances – now mostly used by caterers. But there are remnants of the home’s history, including the original coal-burning stove juxtaposed with new appliances, such as the adjacent stainless steel fridge. “The stove is super cool,” Steven says. “It technically could still work, but nobody uses it. There’s no electricity hooked up to it; there’s no gas hooked up to it. They used to bring up coal from the basement through this dumbwaiter, which is also pretty sweet.”