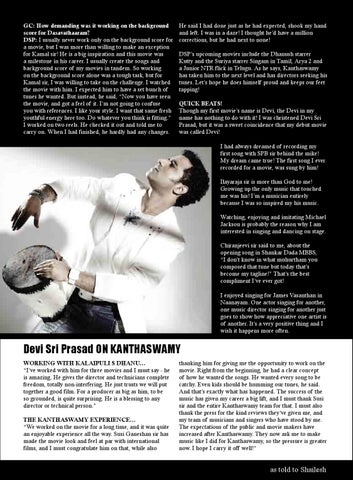 GC: How demanding was it working on the background score for Dasavathaaram? DSP: I usually never work only on the background score for a movie, but I was more than willing to make an exception for Kamal sir! He is a big inspiration and this movie was a milestone in his career. I usually create the songs and background score of my movies in tandem. So working on the background score alone was a tough task, but for Kamal sir, I was willing to take on the challenge. I watched the movie with him. I expected him to have a set bunch of tunes he wanted. But instead, he said, “Now you have seen the movie, and got a feel of it. I’m not going to confuse you with references. I like your style. I want that same fresh youthful energy here too. Do whatever you think is fitting.” I worked on two reels. He checked it out and told me to carry on. When I had finished, he hardly had any changes.

He said I had done just as he had expected, shook my hand and left. I was in a daze! I thought he’d have a million corrections, but he had next to none! DSP’s upcoming movies include the Dhanush starrer Kutty and the Suriya starrer Singam in Tamil, Arya 2 and a Junior NTR flick in Telugu. As he says, Kanthaswamy has taken him to the next level and has directors seeking his tunes. Let’s hope he does himself proud and keeps our feet tapping! Quick Beats! Though my first movie’s name is Devi, the Devi in my name has nothing to do with it! I was christened Devi Sri Prasad, but it was a sweet coincidence that my debut movie was called Devi! I had always dreamed of recording my first song with SPB sir behind the mike! My dream came true! The first song I ever recorded for a movie, was sung by him! Ilayaraja sir is more than God to me! Growing up the only music that touched me was his! I’m a musician entirely because I was so inspired my his music. Watching, enjoying and imitating Michael Jackson is probably the reason why I am interested in singing and dancing on stage. Chiranjeevi sir said to me, about the opening song in Shankar Dada MBBS, “I don’t know in what muhurtham you composed that tune but today that’s become my tagline!” That’s the best compliment I’ve ever got! I enjoyed singing for James Vasanthan in Naanayam. One actor singing for another, one music director singing for another just goes to show how appreciative one artist is of another. It’s a very positive thing and I wish it happens more often.

Devi Sri Prasad ON KANTHASWAMY Working with Kalaipuli S Dhanu... “I’ve worked with him for three movies and I must say - he is amazing. He gives the director and technicians complete freedom, totally non-interfering. He just trusts we will put together a good film. For a producer as big as him, to be so grounded, is quite surprising. He is a blessing to any director or technical person.” The Kanthaswamy experience... “We worked on the movie for a long time, and it was quite an enjoyable experience all the way. Susi Ganeshan sir has made the movie look and feel at par with international films, and I must congratulate him on that, while also

thanking him for giving me the opportunity to work on the movie. Right from the beginning, he had a clear concept of how he wanted the songs. He wanted every song to be catchy. Even kids should be humming our tunes, he said. And that’s exactly what has happened. The success of the music has given my career a big lift, and I must thank Susi sir and the entire Kanthaswamy team for that. I must also thank the press for the kind reviews they’ve given me, and my team of musicians and singers who have stood by me. The expectations of the public and movie makers have increased after Kanthaswamy. They now ask me to make music like I did for Kanthaswamy, so the pressure is greater now. I hope I carry it off well!”

as told to Shailesh 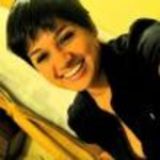