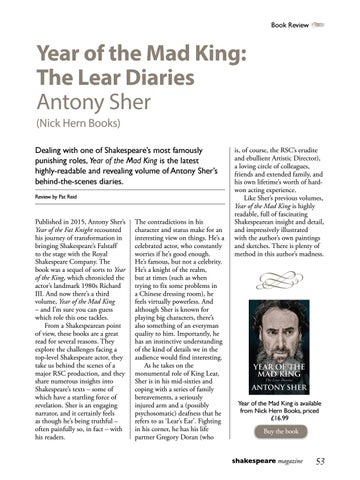 Published in 2015, Antony Sher’s Year of the Fat Knight recounted his journey of transformation in bringing Shakespeare’s Falstaff to the stage with the Royal Shakespeare Company. The book was a sequel of sorts to Year of the King, which chronicled the actor’s landmark 1980s Richard III. And now there’s a third volume, Year of the Mad King – and I’m sure you can guess which role this one tackles. From a Shakespearean point of view, these books are a great read for several reasons. They explore the challenges facing a top-level Shakespeare actor, they take us behind the scenes of a major RSC production, and they share numerous insights into Shakespeare’s texts – some of which have a startling force of revelation. Sher is an engaging narrator, and it certainly feels as though he’s being truthful – often painfully so, in fact – with his readers.

The contradictions in his character and status make for an interesting view on things. He’s a celebrated actor, who constantly worries if he’s good enough. He’s famous, but not a celebrity. He’s a knight of the realm, but at times (such as when trying to fix some problems in a Chinese dressing room), he feels virtually powerless. And although Sher is known for playing big characters, there’s also something of an everyman quality to him. Importantly, he has an instinctive understanding of the kind of details we in the audience would find interesting. As he takes on the monumental role of King Lear, Sher is in his mid-sixties and coping with a series of family bereavements, a seriously injured arm and a (possibly psychosomatic) deafness that he refers to as ‘Lear’s Ear’. Fighting in his corner, he has his life partner Gregory Doran (who

is, of course, the RSC’s erudite and ebullient Artistic Director), a loving circle of colleagues, friends and extended family, and his own lifetime’s worth of hardwon acting experience. Like Sher’s previous volumes, Year of the Mad King is highly readable, full of fascinating Shakespearean insight and detail, and impressively illustrated with the author’s own paintings and sketches. There is plenty of method in this author’s madness.

Year of the Mad King is available from Nick Hern Books, priced £16.99