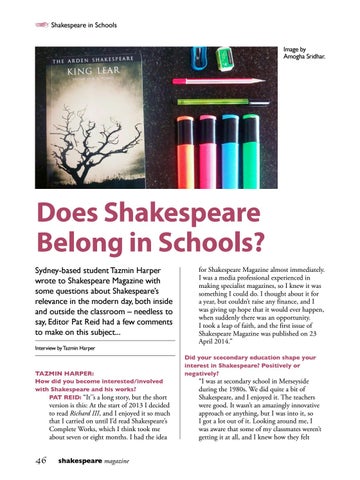 Does Shakespeare Belong in Schools? Sydney-based student Tazmin Harper wrote to Shakespeare Magazine with some questions about Shakespeare’s relevance in the modern day, both inside and outside the classroom – needless to say, Editor Pat Reid had a few comments to make on this subject... Interview by Tazmin Harper

TAZMIN HARPER: How did you become interested/involved with Shakespeare and his works? PAT REID: “It'’s a long story, but the short

version is this: At the start of 2013 I decided to read Richard III, and I enjoyed it so much that I carried on until I’d read Shakespeare’s Complete Works, which I think took me about seven or eight months. I had the idea

for Shakespeare Magazine almost immediately. I was a media professional experienced in making specialist magazines, so I knew it was something I could do. I thought about it for a year, but couldn’t raise any finance, and I was giving up hope that it would ever happen, when suddenly there was an opportunity. I took a leap of faith, and the first issue of Shakespeare Magazine was published on 23 April 2014.” Did your scecondary education shape your interest in Shakespeare? Positively or negatively?

“I was at secondary school in Merseyside during the 1980s. We did quite a bit of Shakespeare, and I enjoyed it. The teachers were good. It wasn’t an amazingly innovative approach or anything, but I was into it, so I got a lot out of it. Looking around me, I was aware that some of my classmates weren’t getting it at all, and I knew how they felt