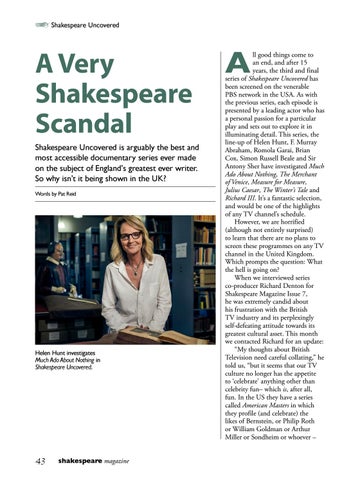 A Very Shakespeare Scandal Shakespeare Uncovered is arguably the best and most accessible documentary series ever made on the subject of England&#39;s greatest ever writer. So why isn’t it being shown in the UK? Words by Pat Reid

Helen Hunt investigates Much Ado About Nothing in Shakespeare Uncovered.

ll good things come to an end, and after 15 years, the third and final series of Shakespeare Uncovered has been screened on the venerable PBS network in the USA. As with the previous series, each episode is presented by a leading actor who has a personal passion for a particular play and sets out to explore it in illuminating detail. This series, the line-up of Helen Hunt, F. Murray Abraham, Romola Garai, Brian Cox, Simon Russell Beale and Sir Antony Sher have investigated Much Ado About Nothing, The Merchant of Venice, Measure for Measure, Julius Caesar, The Winter’s Tale and Richard III. It’s a fantastic selection, and would be one of the highlights of any TV channel’s schedule. However, we are horrified (although not entirely surprised) to learn that there are no plans to screen these programmes on any TV channel in the United Kingdom. Which prompts the question: What the hell is going on? When we interviewed series co-producer Richard Denton for Shakespeare Magazine Issue 7, he was extremely candid about his frustration with the British TV industry and its perplexingly self-defeating attitude towards its greatest cultural asset. This month we contacted Richard for an update: “My thoughts about British Television need careful collating,” he told us, “but it seems that our TV culture no longer has the appetite to ‘celebrate’ anything other than celebrity fun– which is, after all, fun. In the US they have a series called American Masters in which they profile (and celebrate) the likes of Bernstein, or Philip Roth or William Goldman or Arthur Miller or Sondheim or whoever –