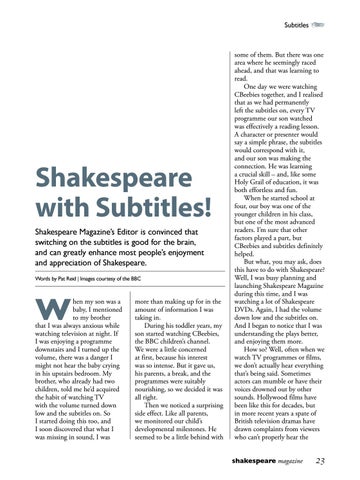 Shakespeare with Subtitles! Shakespeare Magazine’s Editor is convinced that switching on the subtitles is good for the brain, and can greatly enhance most people’s enjoyment and appreciation of Shakespeare. Words by Pat Reid | Images courtesy of the BBC

hen my son was a baby, I mentioned to my brother that I was always anxious while watching television at night. If I was enjoying a programme downstairs and I turned up the volume, there was a danger I might not hear the baby crying in his upstairs bedroom. My brother, who already had two children, told me he’d acquired the habit of watching TV with the volume turned down low and the subtitles on. So I started doing this too, and I soon discovered that what I was missing in sound, I was

more than making up for in the amount of information I was taking in. During his toddler years, my son started watching CBeebies, the BBC children’s channel. We were a little concerned at first, because his interest was so intense. But it gave us, his parents, a break, and the programmes were suitably nourishing, so we decided it was all right. Then we noticed a surprising side effect. Like all parents, we monitored our child’s developmental milestones. He seemed to be a little behind with

some of them. But there was one area where he seemingly raced ahead, and that was learning to read. One day we were watching CBeebies together, and I realised that as we had permanently left the subtitles on, every TV programme our son watched was effectively a reading lesson. A character or presenter would say a simple phrase, the subtitles would correspond with it, and our son was making the connection. He was learning a crucial skill – and, like some Holy Grail of education, it was both effortless and fun. When he started school at four, our boy was one of the younger children in his class, but one of the most advanced readers. I’m sure that other factors played a part, but CBeebies and subtitles definitely helped. But what, you may ask, does this have to do with Shakespeare? Well, I was busy planning and launching Shakespeare Magazine during this time, and I was watching a lot of Shakespeare DVDs. Again, I had the volume down low and the subtitles on. And I began to notice that I was understanding the plays better, and enjoying them more. How so? Well, often when we watch TV programmes or films, we don’t actually hear everything that’s being said. Sometimes actors can mumble or have their voices drowned out by other sounds. Hollywood films have been like this for decades, but in more recent years a spate of British television dramas have drawn complaints from viewers who can’t properly hear the shakespeare magazine