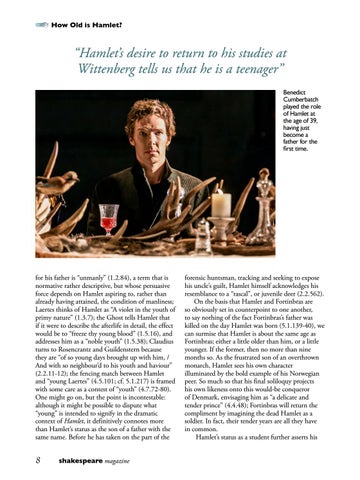 ! How Old is Hamlet? “Hamlet’s desire to return to his studies at Wittenberg tells us that he is a teenager” Benedict Cumberbatch played the role of Hamlet at the age of 39, having just become a father for the ½VWXXMQI

for his father is “unmanly” (1.2.84), a term that is normative rather descriptive, but whose persuasive force depends on Hamlet aspiring to, rather than already having attained, the condition of manliness; Laertes thinks of Hamlet as “A violet in the youth of primy nature” (1.3.7); the Ghost tells Hamlet that if it were to describe the afterlife in detail, the effect would be to “freeze thy young blood” (1.5.16), and addresses him as a “noble youth” (1.5.38); Claudius turns to Rosencrantz and Guildenstern because they are “of so young days brought up with him, / And with so neighbour’d to his youth and haviour” (2.2.11-12); the fencing match between Hamlet and “young Laertes” (4.5.101; cf. 5.1.217) is framed with some care as a contest of “youth” (4.7.72-80). One might go on, but the point is incontestable: although it might be possible to dispute what “young” is intended to signify in the dramatic context of Hamlet, it definitively connotes more than Hamlet’s status as the son of a father with the same name. Before he has taken on the part of the

forensic huntsman, tracking and seeking to expose his uncle’s guilt, Hamlet himself acknowledges his resemblance to a “rascal”, or juvenile deer (2.2.562). On the basis that Hamlet and Fortinbras are so obviously set in counterpoint to one another, to say nothing of the fact Fortinbras’s father was killed on the day Hamlet was born (5.1.139-40), we can surmise that Hamlet is about the same age as Fortinbras; either a little older than him, or a little younger. If the former, then no more than nine months so. As the frustrated son of an overthrown monarch, Hamlet sees his own character illuminated by the bold example of his Norwegian peer. So much so that his final soliloquy projects his own likeness onto this would-be conqueror of Denmark, envisaging him as “a delicate and tender prince” (4.4.48); Fortinbras will return the compliment by imagining the dead Hamlet as a soldier. In fact, their tender years are all they have in common. Hamlet’s status as a student further asserts his