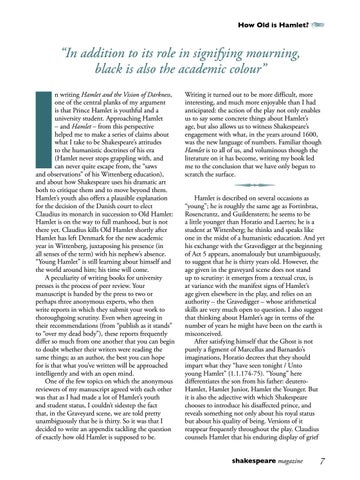 How Old is Hamlet?

“In addition to its role in signifying mourning, black is also the academic colour”

n writing Hamlet and the Vision of Darkness, one of the central planks of my argument is that Prince Hamlet is youthful and a university student. Approaching Hamlet – and Hamlet – from this perspective helped me to make a series of claims about what I take to be Shakespeare’s attitudes to the humanistic doctrines of his era (Hamlet never stops grappling with, and can never quite escape from, the “saws and observations” of his Wittenberg education), and about how Shakespeare uses his dramatic art both to critique them and to move beyond them. Hamlet’s youth also offers a plausible explanation for the decision of the Danish court to elect Claudius its monarch in succession to Old Hamlet: Hamlet is on the way to full manhood, but is not there yet. Claudius kills Old Hamlet shortly after Hamlet has left Denmark for the new academic year in Wittenberg, juxtaposing his presence (in all senses of the term) with his nephew’s absence. “Young Hamlet” is still learning about himself and the world around him; his time will come. A peculiarity of writing books for university presses is the process of peer review. Your manuscript is handed by the press to two or perhaps three anonymous experts, who then write reports in which they submit your work to thoroughgoing scrutiny. Even when agreeing in their recommendations (from “publish as it stands” to “over my dead body”), these reports frequently differ so much from one another that you can begin to doubt whether their writers were reading the same things; as an author, the best you can hope for is that what you’ve written will be approached intelligently and with an open mind. One of the few topics on which the anonymous reviewers of my manuscript agreed with each other was that as I had made a lot of Hamlet’s youth and student status, I couldn’t sidestep the fact that, in the Graveyard scene, we are told pretty unambiguously that he is thirty. So it was that I decided to write an appendix tackling the question of exactly how old Hamlet is supposed to be.

Writing it turned out to be more difficult, more interesting, and much more enjoyable than I had anticipated: the action of the play not only enables us to say some concrete things about Hamlet’s age, but also allows us to witness Shakespeare’s engagement with what, in the years around 1600, was the new language of numbers. Familiar though Hamlet is to all of us, and voluminous though the literature on it has become, writing my book led me to the conclusion that we have only begun to scratch the surface. Hamlet is described on several occasions as “young”; he is roughly the same age as Fortinbras, Rosencrantz, and Guildenstern; he seems to be a little younger than Horatio and Laertes; he is a student at Wittenberg; he thinks and speaks like one in the midst of a humanistic education. And yet his exchange with the Gravedigger at the beginning of Act 5 appears, anomalously but unambiguously, to suggest that he is thirty years old. However, the age given in the graveyard scene does not stand up to scrutiny: it emerges from a textual crux, is at variance with the manifest signs of Hamlet’s age given elsewhere in the play, and relies on an authority – the Gravedigger – whose arithmetical skills are very much open to question. I also suggest that thinking about Hamlet’s age in terms of the number of years he might have been on the earth is misconceived. After satisfying himself that the Ghost is not purely a figment of Marcellus and Barnardo’s imaginations, Horatio decrees that they should impart what they “have seen tonight / Unto young Hamlet” (1.1.174-75). “Young” here differentiates the son from his father: deuteroHamlet, Hamlet Junior, Hamlet the Younger. But it is also the adjective with which Shakespeare chooses to introduce his disaffected prince, and reveals something not only about his royal status but about his quality of being. Versions of it reappear frequently throughout the play. Claudius counsels Hamlet that his enduring display of grief shakespeare magazine