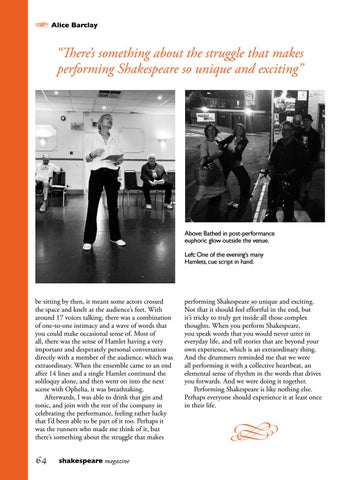 ! Alice Barclay “There’s something about the struggle that makes performing Shakespeare so unique and exciting”

Above: Bathed in post-performance euphoric glow outside the venue. Left: One of the evening’s many Hamlets, cue script in hand.

be sitting by then, it meant some actors crossed the space and knelt at the audience’s feet. With around 17 voices talking, there was a combination of one-to-one intimacy and a wave of words that you could make occasional sense of. Most of all, there was the sense of Hamlet having a very important and desperately personal conversation directly with a member of the audience, which was extraordinary. When the ensemble came to an end after 14 lines and a single Hamlet continued the soliloquy alone, and then went on into the next scene with Ophelia, it was breathtaking. Afterwards, I was able to drink that gin and tonic, and join with the rest of the company in celebrating the performance, feeling rather lucky that I’d been able to be part of it too. Perhaps it was the runners who made me think of it, but there’s something about the struggle that makes

performing Shakespeare so unique and exciting. Not that it should feel effortful in the end, but it’s tricky to truly get inside all those complex thoughts. When you perform Shakespeare, you speak words that you would never utter in everyday life, and tell stories that are beyond your own experience, which is an extraordinary thing. And the drummers reminded me that we were all performing it with a collective heartbeat, an elemental sense of rhythm in the words that drives you forwards. And we were doing it together. Performing Shakespeare is like nothing else. Perhaps everyone should experience it at least once in their life.