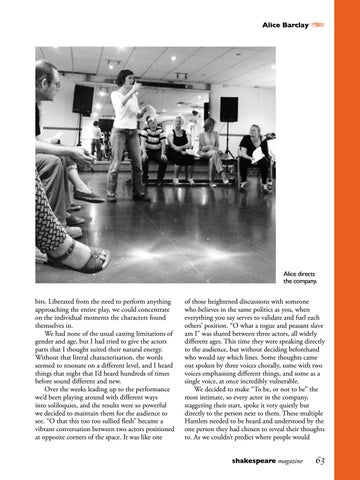 bits. Liberated from the need to perform anything approaching the entire play, we could concentrate on the individual moments the characters found themselves in. We had none of the usual casting limitations of gender and age, but I had tried to give the actors parts that I thought suited their natural energy. Without that literal characterisation, the words seemed to resonate on a different level, and I heard things that night that I’d heard hundreds of times before sound different and new. Over the weeks leading up to the performance we’d been playing around with different ways into soliloquies, and the results were so powerful we decided to maintain them for the audience to see. “O that this too too sullied flesh” became a vibrant conversation between two actors positioned at opposite corners of the space. It was like one

of those heightened discussions with someone who believes in the same politics as you, when everything you say serves to validate and fuel each others’ position. “O what a rogue and peasant slave am I” was shared between three actors, all widely different ages. This time they were speaking directly to the audience, but without deciding beforehand who would say which lines. Some thoughts came out spoken by three voices chorally, some with two voices emphasising different things, and some as a single voice, at once incredibly vulnerable. We decided to make “To be, or not to be” the most intimate, so every actor in the company, staggering their start, spoke it very quietly but directly to the person next to them. These multiple Hamlets needed to be heard and understood by the one person they had chosen to reveal their thoughts to. As we couldn’t predict where people would shakespeare magazine