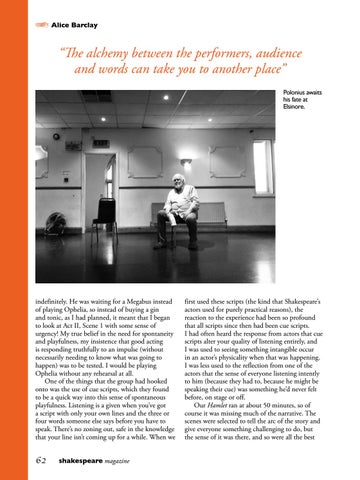 ! Alice Barclay “The alchemy between the performers, audience and words can take you to another place” Polonius awaits his fate at Elsinore.

indefinitely. He was waiting for a Megabus instead of playing Ophelia, so instead of buying a gin and tonic, as I had planned, it meant that I began to look at Act II, Scene 1 with some sense of urgency! My true belief in the need for spontaneity and playfulness, my insistence that good acting is responding truthfully to an impulse (without necessarily needing to know what was going to happen) was to be tested. I would be playing Ophelia without any rehearsal at all. One of the things that the group had hooked onto was the use of cue scripts, which they found to be a quick way into this sense of spontaneous playfulness. Listening is a given when you’ve got a script with only your own lines and the three or four words someone else says before you have to speak. There’s no zoning out, safe in the knowledge that your line isn’t coming up for a while. When we

first used these scripts (the kind that Shakespeare’s actors used for purely practical reasons), the reaction to the experience had been so profound that all scripts since then had been cue scripts. I had often heard the response from actors that cue scripts alter your quality of listening entirely, and I was used to seeing something intangible occur in an actor’s physicality when that was happening. I was less used to the reflection from one of the actors that the sense of everyone listening intently to him (because they had to, because he might be speaking their cue) was something he’d never felt before, on stage or off. Our Hamlet ran at about 50 minutes, so of course it was missing much of the narrative. The scenes were selected to tell the arc of the story and give everyone something challenging to do, but the sense of it was there, and so were all the best