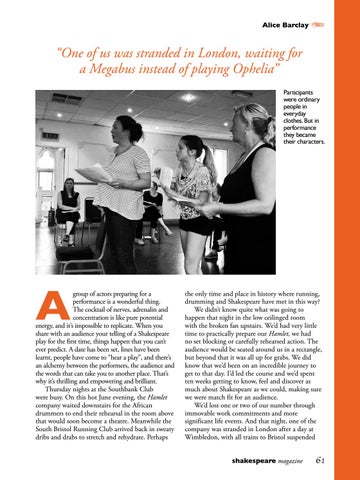 “One of us was stranded in London, waiting for a Megabus instead of playing Ophelia” Participants were ordinary people in everyday clothes. But in performance they became their characters.

group of actors preparing for a performance is a wonderful thing. The cocktail of nerves, adrenalin and concentration is like pure potential energy, and it’s impossible to replicate. When you share with an audience your telling of a Shakespeare play for the first time, things happen that you can’t ever predict. A date has been set, lines have been learnt, people have come to “hear a play”, and there’s an alchemy between the performers, the audience and the words that can take you to another place. That’s why it’s thrilling and empowering and brilliant. Thursday nights at the Southbank Club were busy. On this hot June evening, the Hamlet company waited downstairs for the African drummers to end their rehearsal in the room above that would soon become a theatre. Meanwhile the South Bristol Running Club arrived back in sweaty dribs and drabs to stretch and rehydrate. Perhaps

the only time and place in history where running, drumming and Shakespeare have met in this way? We didn’t know quite what was going to happen that night in the low ceilinged room with the broken fan upstairs. We’d had very little time to practically prepare our Hamlet, we had no set blocking or carefully rehearsed action. The audience would be seated around us in a rectangle, but beyond that it was all up for grabs. We did know that we’d been on an incredible journey to get to that day. I’d led the course and we’d spent ten weeks getting to know, feel and discover as much about Shakespeare as we could, making sure we were match fit for an audience. We’d lost one or two of our number through immovable work commitments and more significant life events. And that night, one of the company was stranded in London after a day at Wimbledon, with all trains to Bristol suspended shakespeare magazine