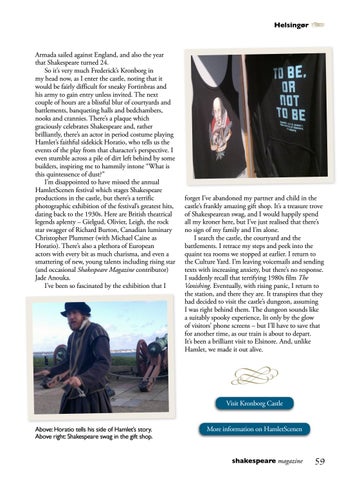 Armada sailed against England, and also the year that Shakespeare turned 24. So it’s very much Frederick’s Kronborg in my head now, as I enter the castle, noting that it would be fairly difficult for sneaky Fortinbras and his army to gain entry unless invited. The next couple of hours are a blissful blur of courtyards and battlements, banqueting halls and bedchambers, nooks and crannies. There’s a plaque which graciously celebrates Shakespeare and, rather brilliantly, there’s an actor in period costume playing Hamlet’s faithful sidekick Horatio, who tells us the events of the play from that character’s perspective. I even stumble across a pile of dirt left behind by some builders, inspiring me to hammily intone “What is this quintessence of dust?” I’m disappointed to have missed the annual HamletScenen festival which stages Shakespeare productions in the castle, but there’s a terrific photographic exhibition of the festival’s greatest hits, dating back to the 1930s. Here are British theatrical legends aplenty – Gielgud, Olivier, Leigh, the rock star swagger of Richard Burton, Canadian luminary Christopher Plummer (with Michael Caine as Horatio). There’s also a plethora of European actors with every bit as much charisma, and even a smattering of new, young talents including rising star (and occasional Shakespeare Magazine contributor) Jade Anouka. I’ve been so fascinated by the exhibition that I

forget I’ve abandoned my partner and child in the castle’s frankly amazing gift shop. It’s a treasure trove of Shakespearean swag, and I would happily spend all my kroner here, but I’ve just realised that there’s no sign of my family and I’m alone. I search the castle, the courtyard and the battlements. I retrace my steps and peek into the quaint tea rooms we stopped at earlier. I return to the Culture Yard. I’m leaving voicemails and sending texts with increasing anxiety, but there’s no response. I suddenly recall that terrifying 1980s film The Vanishing. Eventually, with rising panic, I return to the station, and there they are. It transpires that they had decided to visit the castle’s dungeon, assuming I was right behind them. The dungeon sounds like a suitably spooky experience, lit only by the glow of visitors’ phone screens – but I’ll have to save that for another time, as our train is about to depart. It’s been a brilliant visit to Elsinore. And, unlike Hamlet, we made it out alive.

Visit Kronborg Castle Above: Horatio tells his side of Hamlet’s story. Above right: Shakespeare swag in the gift shop.