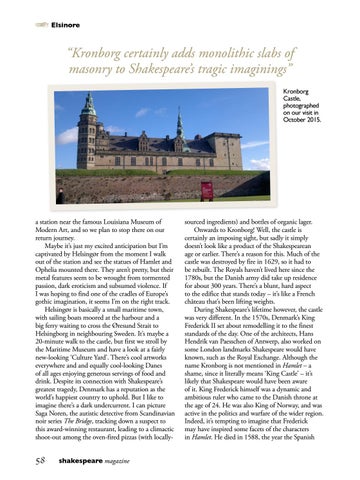 a station near the famous Louisiana Museum of Modern Art, and so we plan to stop there on our return journey. Maybe it’s just my excited anticipation but I’m captivated by HelsingØr from the moment I walk out of the station and see the statues of Hamlet and Ophelia mounted there. They aren’t pretty, but their metal features seem to be wrought from tormented passion, dark eroticism and subsumed violence. If I was hoping to find one of the cradles of Europe’s gothic imagination, it seems I’m on the right track. HelsingØr is basically a small maritime town, with sailing boats moored at the harbour and a big ferry waiting to cross the Øresund Strait to Helsingborg in neighbouring Sweden. It’s maybe a 20-minute walk to the castle, but first we stroll by the Maritime Museum and have a look at a fairly new-looking ‘Culture Yard’. There’s cool artworks everywhere and and equally cool-looking Danes of all ages enjoying generous servings of food and drink. Despite its connection with Shakespeare’s greatest tragedy, Denmark has a reputation as the world’s happiest country to uphold. But I like to imagine there’s a dark undercurrent. I can picture Saga Noren, the autistic detective from Scandinavian noir series The Bridge, tracking down a suspect to this award-winning restaurant, leading to a climactic shoot-out among the oven-fired pizzas (with locally-

sourced ingredients) and bottles of organic lager. Onwards to Kronborg! Well, the castle is certainly an imposing sight, but sadly it simply doesn’t look like a product of the Shakespearean age or earlier. There’s a reason for this. Much of the castle was destroyed by fire in 1629, so it had to be rebuilt. The Royals haven’t lived here since the 1780s, but the Danish army did take up residence for about 300 years. There’s a blunt, hard aspect to the edifice that stands today – it’s like a French château that’s been lifting weights. During Shakespeare’s lifetime however, the castle was very different. In the 1570s, Denmark’s King Frederick II set about remodelling it to the finest standards of the day. One of the architects, Hans Hendrik van Paesschen of Antwerp, also worked on some London landmarks Shakespeare would have known, such as the Royal Exchange. Although the name Kronborg is not mentioned in Hamlet – a shame, since it literally means ‘King Castle’ – it’s likely that Shakespeare would have been aware of it. King Frederick himself was a dynamic and ambitious ruler who came to the Danish throne at the age of 24. He was also King of Norway, and was active in the politics and warfare of the wider region. Indeed, it’s tempting to imagine that Frederick may have inspired some facets of the characters in Hamlet. He died in 1588, the year the Spanish