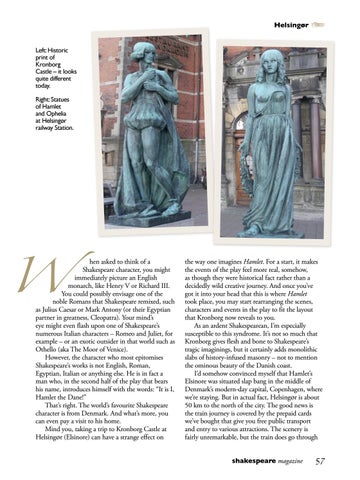 hen asked to think of a Shakespeare character, you might immediately picture an English monarch, like Henry V or Richard III. You could possibly envisage one of the noble Romans that Shakespeare remixed, such as Julius Caesar or Mark Antony (or their Egyptian partner in greatness, Cleopatra). Your mind’s eye might even flash upon one of Shakespeare’s numerous Italian characters – Romeo and Juliet, for example – or an exotic outsider in that world such as Othello (aka The Moor of Venice). However, the character who most epitomises Shakespeare’s works is not English, Roman, Egyptian, Italian or anything else. He is in fact a man who, in the second half of the play that bears his name, introduces himself with the words: “It is I, Hamlet the Dane!” That’s right. The world’s favourite Shakespeare character is from Denmark. And what’s more, you can even pay a visit to his home. Mind you, taking a trip to Kronborg Castle at HelsingØr (Elsinore) can have a strange effect on

the way one imagines Hamlet. For a start, it makes the events of the play feel more real, somehow, as though they were historical fact rather than a decidedly wild creative journey. And once you’ve got it into your head that this is where Hamlet took place, you may start rearranging the scenes, characters and events in the play to fit the layout that Kronborg now reveals to you. As an ardent Shakespearean, I’m especially susceptible to this syndrome. It’s not so much that Kronborg gives flesh and bone to Shakespeare’s tragic imaginings, but it certainly adds monolithic slabs of history-infused masonry – not to mention the ominous beauty of the Danish coast. I’d somehow convinced myself that Hamlet’s Elsinore was situated slap bang in the middle of Denmark’s modern-day capital, Copenhagen, where we’re staying. But in actual fact, Helsingør is about 50 km to the north of the city. The good news is the train journey is covered by the prepaid cards we’ve bought that give you free public transport and entry to various attractions. The scenery is fairly unremarkable, but the train does go through shakespeare magazine