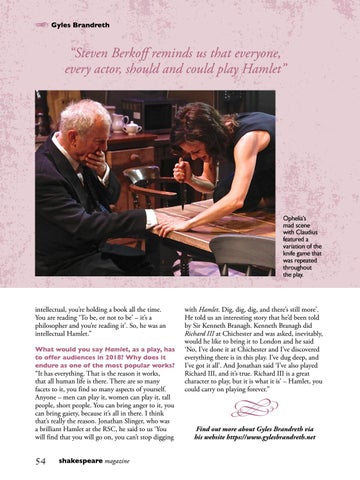 ! Gyles Brandreth “Steven Berkoff reminds us that everyone, every actor, should and could play Hamlet”

Ophelia’s mad scene with Claudius featured a variation of the knife game that was repeated throughout the play.

intellectual, you’re holding a book all the time. You are reading ‘To be, or not to be’ – it’s a philosopher and you’re reading it’. So, he was an intellectual Hamlet.” What would you say Hamlet, as a play, has to offer audiences in 2018? Why does it endure as one of the most popular works?

“It has everything. That is the reason it works, that all human life is there. There are so many facets to it, you find so many aspects of yourself. Anyone – men can play it, women can play it, tall people, short people. You can bring anger to it, you can bring gaiety, because it’s all in there. I think that’s really the reason. Jonathan Slinger, who was a brilliant Hamlet at the RSC, he said to us ‘You will find that you will go on, you can’t stop digging

with Hamlet. Dig, dig, dig, and there’s still more’. He told us an interesting story that he’d been told by Sir Kenneth Branagh. Kenneth Branagh did Richard III at Chichester and was asked, inevitably, would he like to bring it to London and he said ‘No, I’ve done it at Chichester and I’ve discovered everything there is in this play. I’ve dug deep, and I’ve got it all’. And Jonathan said ‘I’ve also played Richard III, and it’s true. Richard III is a great character to play, but it is what it is’ – Hamlet, you could carry on playing forever.”

Find out more about Gyles Brandreth via his website https://www.gylesbrandreth.net