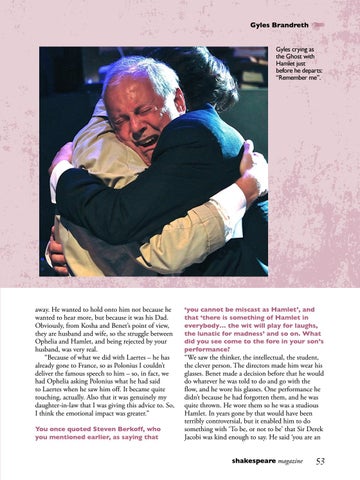 Gyles crying as the Ghost with Hamlet just before he departs: “Remember me”.

away. He wanted to hold onto him not because he wanted to hear more, but because it was his Dad. Obviously, from Kosha and Benet’s point of view, they are husband and wife, so the struggle between Ophelia and Hamlet, and being rejected by your husband, was very real. “Because of what we did with Laertes – he has already gone to France, so as Polonius I couldn’t deliver the famous speech to him – so, in fact, we had Ophelia asking Polonius what he had said to Laertes when he saw him off. It became quite touching, actually. Also that it was genuinely my daughter-in-law that I was giving this advice to. So, I think the emotional impact was greater.” You once quoted Steven Berkoff, who you mentioned earlier, as saying that

‘you cannot be miscast as Hamlet’, and that ‘there is something of Hamlet in everybody… the wit will play for laughs, the lunatic for madness’ and so on. What did you see come to the fore in your son’s performance?

“We saw the thinker, the intellectual, the student, the clever person. The directors made him wear his glasses. Benet made a decision before that he would do whatever he was told to do and go with the flow, and he wore his glasses. One performance he didn’t because he had forgotten them, and he was quite thrown. He wore them so he was a studious Hamlet. In years gone by that would have been terribly controversial, but it enabled him to do something with ‘To be, or not to be’ that Sir Derek Jacobi was kind enough to say. He said ‘you are an shakespeare magazine