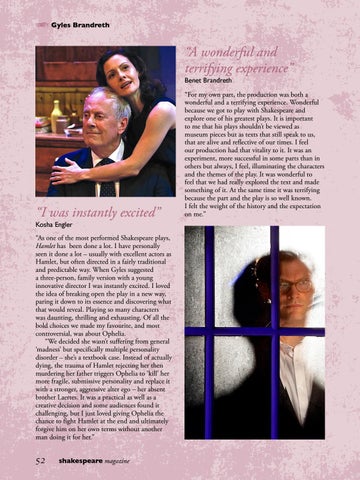 “I was instantly excited” Kosha Engler

“As one of the most performed Shakespeare plays, Hamlet has been done a lot. I have personally seen it done a lot – usually with excellent actors as Hamlet, but often directed in a fairly traditional and predictable way. When Gyles suggested a three-person, family version with a young innovative director I was instantly excited. I loved the idea of breaking open the play in a new way, paring it down to its essence and discovering what that would reveal. Playing so many characters was daunting, thrilling and exhausting. Of all the bold choices we made my favourite, and most controversial, was about Ophelia. “We decided she wasn’t suffering from general ‘madness’ but specifically multiple personality disorder – she’s a textbook case. Instead of actually dying, the trauma of Hamlet rejecting her then murdering her father triggers Ophelia to ‘kill’ her more fragile, submissive personality and replace it with a stronger, aggressive alter ego – her absent brother Laertes. It was a practical as well as a creative decision and some audiences found it challenging, but I just loved giving Ophelia the chance to fight Hamlet at the end and ultimately forgive him on her own terms without another man doing it for her.”

“For my own part, the production was both a wonderful and a terrifying experience. Wonderful because we got to play with Shakespeare and explore one of his greatest plays. It is important to me that his plays shouldn’t be viewed as museum pieces but as texts that still speak to us, that are alive and reflective of our times. I feel our production had that vitality to it. It was an experiment, more successful in some parts than in others but always, I feel, illuminating the characters and the themes of the play. It was wonderful to feel that we had really explored the text and made something of it. At the same time it was terrifying because the part and the play is so well known. I felt the weight of the history and the expectation on me.”