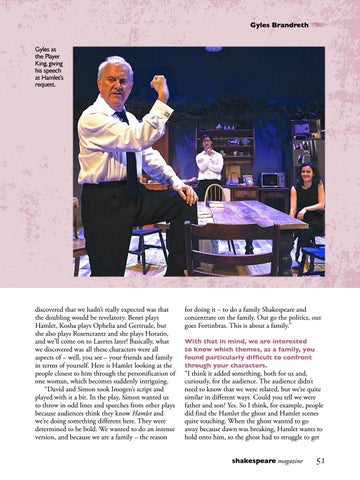 Gyles as the Player King, giving his speech at Hamlet’s request.

discovered that we hadn’t really expected was that the doubling would be revelatory. Benet plays Hamlet, Kosha plays Ophelia and Gertrude, but she also plays Rosencrantz and she plays Horatio, and we’ll come on to Laertes later! Basically, what we discovered was all these characters were all aspects of – well, you see – your friends and family in terms of yourself. Here is Hamlet looking at the people closest to him through the personification of one woman, which becomes suddenly intriguing. “David and Simon took Imogen’s script and played with it a bit. In the play, Simon wanted us to throw in odd lines and speeches from other plays because audiences think they know Hamlet and we’re doing something different here. They were determined to be bold. We wanted to do an intense version, and because we are a family – the reason

for doing it – to do a family Shakespeare and concentrate on the family. Out go the politics, out goes Fortinbras. This is about a family.” With that in mind, we are interested to know which themes, as a family, you found particularly difficult to confront through your characters.

“I think it added something, both for us and, curiously, for the audience. The audience didn’t need to know that we were related, but we’re quite similar in different ways. Could you tell we were father and son? Yes. So I think, for example, people did find the Hamlet the ghost and Hamlet scenes quite touching. When the ghost wanted to go away because dawn was breaking, Hamlet wants to hold onto him, so the ghost had to struggle to get shakespeare magazine