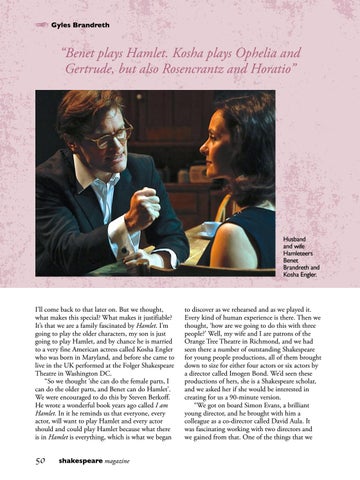 I’ll come back to that later on. But we thought, what makes this special? What makes it justifiable? It’s that we are a family fascinated by Hamlet. I’m going to play the older characters, my son is just going to play Hamlet, and by chance he is married to a very fine American actress called Kosha Engler who was born in Maryland, and before she came to live in the UK performed at the Folger Shakespeare Theatre in Washington DC. “So we thought ‘she can do the female parts, I can do the older parts, and Benet can do Hamlet’. We were encouraged to do this by Steven Berkoff. He wrote a wonderful book years ago called I am Hamlet. In it he reminds us that everyone, every actor, will want to play Hamlet and every actor should and could play Hamlet because what there is in Hamlet is everything, which is what we began

to discover as we rehearsed and as we played it. Every kind of human experience is there. Then we thought, ‘how are we going to do this with three people?’ Well, my wife and I are patrons of the Orange Tree Theatre in Richmond, and we had seen there a number of outstanding Shakespeare for young people productions, all of them brought down to size for either four actors or six actors by a director called Imogen Bond. We’d seen these productions of hers, she is a Shakespeare scholar, and we asked her if she would be interested in creating for us a 90-minute version. “We got on board Simon Evans, a brilliant young director, and he brought with him a colleague as a co-director called David Aula. It was fascinating working with two directors and we gained from that. One of the things that we