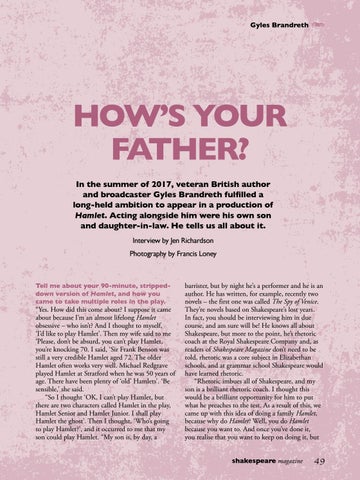 HOW’S YOUR FATHER? In the summer of 2017, veteran British author ERHFVSEHGEWXIV+]PIW&VERHVIXLJYP½PPIHE long-held ambition to appear in a production of Hamlet. Acting alongside him were his own son and daughter-in-law. He tells us all about it. Interview by Jen Richardson Photography by Francis Loney

Tell me about your 90-minute, strippeddown version of Hamlet, and how you came to take multiple roles in the play.

“Yes. How did this come about? I suppose it came about because I’m an almost lifelong Hamlet obsessive – who isn’t? And I thought to myself, ‘I’d like to play Hamlet’. Then my wife said to me ‘Please, don’t be absurd, you can’t play Hamlet, you’re knocking 70. I said, ‘Sir Frank Benson was still a very credible Hamlet aged 72. The older Hamlet often works very well. Michael Redgrave played Hamlet at Stratford when he was 50 years of age. There have been plenty of ‘old’ Hamlets’. ‘Be sensible,’ she said. “So I thought ‘OK, I can’t play Hamlet, but there are two characters called Hamlet in the play, Hamlet Senior and Hamlet Junior. I shall play Hamlet the ghost’. Then I thought, ‘Who’s going to play Hamlet?’, and it occurred to me that my son could play Hamlet. “My son is, by day, a

barrister, but by night he’s a performer and he is an author. He has written, for example, recently two novels – the first one was called The Spy of Venice. They’re novels based on Shakespeare’s lost years. In fact, you should be interviewing him in due course, and am sure will be! He knows all about Shakespeare, but more to the point, he’s rhetoric coach at the Royal Shakespeare Company and, as readers of Shakespeare Magazine don’t need to be told, rhetoric was a core subject in Elizabethan schools, and at grammar school Shakespeare would have learned rhetoric. “Rhetoric imbues all of Shakespeare, and my son is a brilliant rhetoric coach. I thought this would be a brilliant opportunity for him to put what he preaches to the test. As a result of this, we came up with this idea of doing a family Hamlet, because why do Hamlet? Well, you do Hamlet because you want to. And once you’ve done it, you realise that you want to keep on doing it, but shakespeare magazine