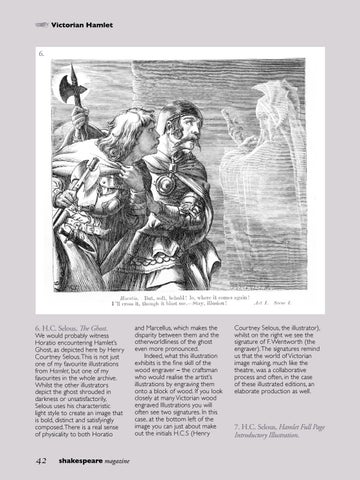 We would probably witness Horatio encountering Hamlet’s Ghost, as depicted here by Henry Courtney Selous. This is not just one of my favourite illustrations from Hamlet, but one of my favourites in the whole archive. Whilst the other illustrators depict the ghost shrouded in darkness or unsatisfactorily, Selous uses his characteristic light style to create an image that is bold, distinct and satisfyingly composed. There is a real sense of physicality to both Horatio

and Marcellus, which makes the disparity between them and the otherworldliness of the ghost even more pronounced. Indeed, what this illustration I\LMFMXWMWXLI½RIWOMPPSJXLI wood engraver – the craftsman who would realise the artist’s illustrations by engraving them onto a block of wood. If you look closely at many Victorian wood engraved Illustrations you will often see two signatures. In this case, at the bottom left of the image you can just about make out the initials H.C.S (Henry

Courtney Selous, the illustrator), whilst on the right we see the signature of F. Wentworth (the engraver). The signatures remind us that the world of Victorian image making, much like the theatre, was a collaborative process and often, in the case of these illustrated editions, an elaborate production as well.