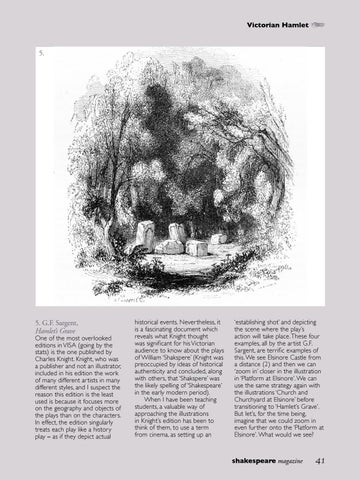 One of the most overlooked editions in VISA (going by the stats) is the one published by Charles Knight. Knight, who was a publisher and not an illustrator, included in his edition the work of many different artists in many different styles, and I suspect the reason this edition is the least used is because it focuses more on the geography and objects of the plays than on the characters. In effect, the edition singularly treats each play like a history play – as if they depict actual

historical events. Nevertheless, it is a fascinating document which reveals what Knight thought [EWWMKRM½GERXJSVLMW:MGXSVMER audience to know about the plays of William ‘Shakspere’ (Knight was preoccupied by ideas of historical authenticity and concluded, along with others, that ‘Shakspere’ was the likely spelling of ‘Shakespeare’ in the early modern period). When I have been teaching students, a valuable way of approaching the illustrations in Knight’s edition has been to think of them, to use a term from cinema, as setting up an

‘establishing shot’ and depicting the scene where the play’s action will take place. These four examples, all by the artist G.F. 7EVKIRXEVIXIVVM½GI\EQTPIWSJ this. We see Elsinore Castle from a distance (2) and then we can ‘zoom in’ closer in the illustration in ‘Platform at Elsinore’. We can use the same strategy again with the illustrations ‘Church and Churchyard at Elsinore’ before transitioning to ‘Hamlet’s Grave’. But let’s, for the time being, imagine that we could zoom in even further onto the ‘Platform at Elsinore’. What would we see?