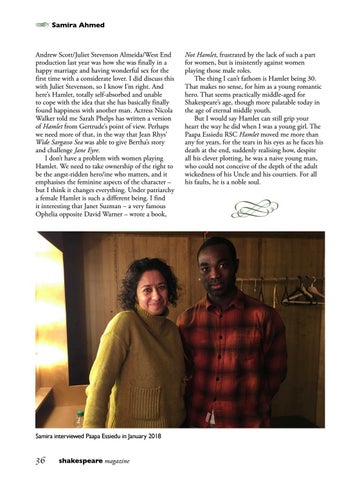 ! Samira Ahmed Andrew Scott/Juliet Stevenson Almeida/West End production last year was how she was finally in a happy marriage and having wonderful sex for the first time with a considerate lover. I did discuss this with Juliet Stevenson, so I know I’m right. And here’s Hamlet, totally self-absorbed and unable to cope with the idea that she has basically finally found happiness with another man. Actress Nicola Walker told me Sarah Phelps has written a version of Hamlet from Gertrude’s point of view. Perhaps we need more of that, in the way that Jean Rhys’ Wide Sargasso Sea was able to give Bertha’s story and challenge Jane Eyre. I don’t have a problem with women playing Hamlet. We need to take ownership of the right to be the angst-ridden hero/ine who matters, and it emphasises the feminine aspects of the character – but I think it changes everything. Under patriarchy a female Hamlet is such a different being. I find it interesting that Janet Suzman – a very famous Ophelia opposite David Warner – wrote a book,

Not Hamlet, frustrated by the lack of such a part for women, but is insistently against women playing those male roles. The thing I can’t fathom is Hamlet being 30. That makes no sense, for him as a young romantic hero. That seems practically middle-aged for Shakespeare’s age, though more palatable today in the age of eternal middle youth. But I would say Hamlet can still grip your heart the way he did when I was a young girl. The Paapa Essiedu RSC Hamlet moved me more than any for years, for the tears in his eyes as he faces his death at the end, suddenly realising how, despite all his clever plotting, he was a naive young man, who could not conceive of the depth of the adult wickedness of his Uncle and his courtiers. For all his faults, he is a noble soul.