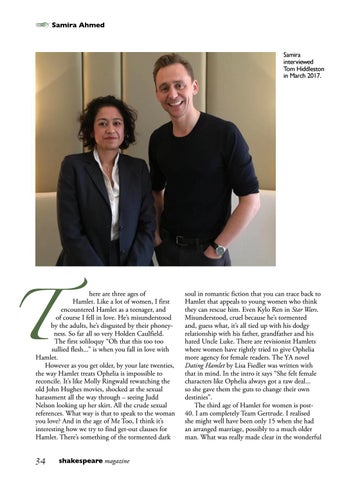 here are three ages of Hamlet. Like a lot of women, I first encountered Hamlet as a teenager, and of course I fell in love. He’s misunderstood by the adults, he’s disgusted by their phoneyness. So far all so very Holden Caulfield. The first soliloquy “Oh that this too too sullied flesh...” is when you fall in love with Hamlet. However as you get older, by your late twenties, the way Hamlet treats Ophelia is impossible to reconcile. It’s like Molly Ringwald rewatching the old John Hughes movies, shocked at the sexual harassment all the way through – seeing Judd Nelson looking up her skirt. All the crude sexual references. What way is that to speak to the woman you love? And in the age of Me Too, I think it’s interesting how we try to find get-out clauses for Hamlet. There’s something of the tormented dark

soul in romantic fiction that you can trace back to Hamlet that appeals to young women who think they can rescue him. Even Kylo Ren in Star Wars. Misunderstood, cruel because he’s tormented and, guess what, it’s all tied up with his dodgy relationship with his father, grandfather and his hated Uncle Luke. There are revisionist Hamlets where women have rightly tried to give Ophelia more agency for female readers. The YA novel Dating Hamlet by Lisa Fiedler was written with that in mind. In the intro it says “She felt female characters like Ophelia always got a raw deal... so she gave them the guts to change their own destinies”. The third age of Hamlet for women is post40. I am completely Team Gertrude. I realised she might well have been only 15 when she had an arranged marriage, possibly to a much older man. What was really made clear in the wonderful

Hamlet is the theme of Shakespeare Magazine Issue 14, with each and every article devoted to the fictional Prince of Denmark and the play that bears his name. Rhodri Lewis asks “How Old is Hamlet?” while Samira Ahmed wonders “Why do Women Love Hamlet?” and we review recent productions of the play starring Tom Hiddleston and Andrew Scott. There's a set report from the making of Daisy Ridley's Ophelia movie and a visit to Hamlet's historic home, Kronborg Castle. We also delve deep into the Victorian Illustrated Shakespeare Archive's Hamlet collection, while Gyles Brandreth tells us about his family production of the play, and Alice Barclay recounts how she taught a group of amateur actors to become Hamlet.