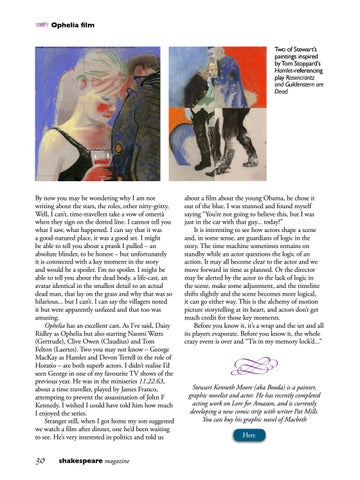 By now you may be wondering why I am not writing about the stars, the roles, other nitty-gritty. Well, I can’t, time-travellers take a vow of omertà when they sign on the dotted line. I cannot tell you what I saw, what happened. I can say that it was a good-natured place, it was a good set. I might be able to tell you about a prank I pulled – an absolute blinder, to be honest – but unfortunately it is connected with a key moment in the story and would be a spoiler. I’m no spoiler. I might be able to tell you about the dead body, a life-cast, an avatar identical in the smallest detail to an actual dead man, that lay on the grass and why that was so hilarious... but I can’t. I can say the villagers noted it but were apparently unfazed and that too was amusing. Ophelia has an excellent cast. As I’ve said, Daisy Ridley as Ophelia but also starring Naomi Watts (Gertrude), Clive Owen (Claudius) and Tom Felton (Laertes). Two you may not know – George MacKay as Hamlet and Devon Terrell in the role of Horatio – are both superb actors. I didn’t realise I’d seen George in one of my favourite TV shows of the previous year. He was in the miniseries 11.22.63, about a time traveller, played by James Franco, attempting to prevent the assassination of John F Kennedy. I wished I could have told him how much I enjoyed the series. Stranger still, when I got home my son suggested we watch a film after dinner, one he’d been waiting to see. He’s very interested in politics and told us

about a film about the young Obama, he chose it out of the blue. I was stunned and found myself saying “You’re not going to believe this, but I was just in the car with that guy... today!” It is interesting to see how actors shape a scene and, in some sense, are guardians of logic in the story. The time machine sometimes remains on standby while an actor questions the logic of an action. It may all become clear to the actor and we move forward in time as planned. Or the director may be alerted by the actor to the lack of logic in the scene, make some adjustment, and the timeline shifts slightly and the scene becomes more logical, it can go either way. This is the alchemy of motion picture storytelling at its heart, and actors don’t get much credit for those key moments. Before you know it, it’s a wrap and the set and all its players evaporate. Before you know it, the whole crazy event is over and “Tis in my memory lock’d...”

Stewart Kenneth Moore (aka Booda) is a painter, graphic novelist and actor. He has recently completed acting work on Lore for Amazon, and is currently developing a new comic strip with writer Pat Mills. You can buy his graphic novel of Macbeth Here