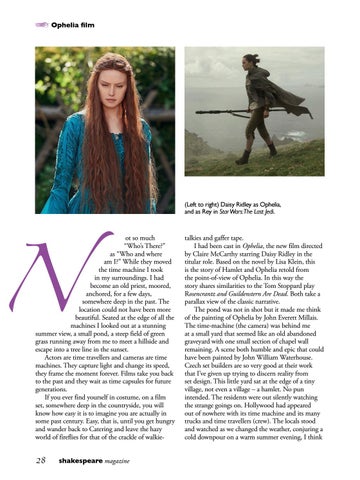 (Left to right) Daisy Ridley as Ophelia, and as Rey in Star Wars:The Last Jedi.

ot so much “Who’s There?” as “Who and where am I?” While they moved the time machine I took in my surroundings. I had become an old priest, moored, anchored, for a few days, somewhere deep in the past. The location could not have been more beautiful. Seated at the edge of all the machines I looked out at a stunning summer view, a small pond, a steep field of green grass running away from me to meet a hillside and escape into a tree line in the sunset. Actors are time travellers and cameras are time machines. They capture light and change its speed, they frame the moment forever. Films take you back to the past and they wait as time capsules for future generations. If you ever find yourself in costume, on a film set, somewhere deep in the countryside, you will know how easy it is to imagine you are actually in some past century. Easy, that is, until you get hungry and wander back to Catering and leave the hazy world of fireflies for that of the crackle of walkie-

talkies and gaffer tape. I had been cast in Ophelia, the new film directed by Claire McCarthy starring Daisy Ridley in the titular role. Based on the novel by Lisa Klein, this is the story of Hamlet and Ophelia retold from the point-of-view of Ophelia. In this way the story shares similarities to the Tom Stoppard play Rosencrantz and Guildenstern Are Dead. Both take a parallax view of the classic narrative. The pond was not in shot but it made me think of the painting of Ophelia by John Everett Millais. The time-machine (the camera) was behind me at a small yard that seemed like an old abandoned graveyard with one small section of chapel wall remaining. A scene both humble and epic that could have been painted by John William Waterhouse. Czech set builders are so very good at their work that I’ve given up trying to discern reality from set design. This little yard sat at the edge of a tiny village, not even a village – a hamlet. No pun intended. The residents were out silently watching the strange goings on. Hollywood had appeared out of nowhere with its time machine and its many trucks and time travellers (crew). The locals stood and watched as we changed the weather, conjuring a cold downpour on a warm summer evening, I think