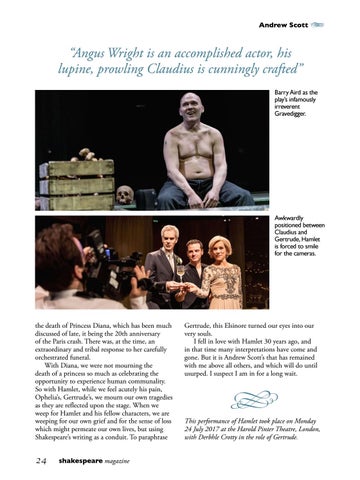 Awkwardly positioned between Claudius and Gertrude, Hamlet is forced to smile for the cameras.

the death of Princess Diana, which has been much discussed of late, it being the 20th anniversary of the Paris crash. There was, at the time, an extraordinary and tribal response to her carefully orchestrated funeral. With Diana, we were not mourning the death of a princess so much as celebrating the opportunity to experience human communality. So with Hamlet, while we feel acutely his pain, Ophelia’s, Gertrude’s, we mourn our own tragedies as they are reflected upon the stage. When we weep for Hamlet and his fellow characters, we are weeping for our own grief and for the sense of loss which might permeate our own lives, but using Shakespeare’s writing as a conduit. To paraphrase

Gertrude, this Elsinore turned our eyes into our very souls. I fell in love with Hamlet 30 years ago, and in that time many interpretations have come and gone. But it is Andrew Scott’s that has remained with me above all others, and which will do until usurped. I suspect I am in for a long wait.

This performance of Hamlet took place on Monday 24 July 2017 at the Harold Pinter Theatre, London, with Derbhle Crotty in the role of Gertrude.