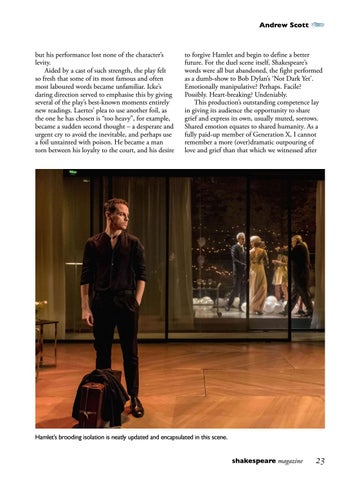 but his performance lost none of the character’s levity. Aided by a cast of such strength, the play felt so fresh that some of its most famous and often most laboured words became unfamiliar. Icke’s daring direction served to emphasise this by giving several of the play’s best-known moments entirely new readings. Laertes’ plea to use another foil, as the one he has chosen is “too heavy”, for example, became a sudden second thought – a desperate and urgent cry to avoid the inevitable, and perhaps use a foil untainted with poison. He became a man torn between his loyalty to the court, and his desire

to forgive Hamlet and begin to define a better future. For the duel scene itself, Shakespeare’s words were all but abandoned, the fight performed as a dumb-show to Bob Dylan’s ‘Not Dark Yet’. Emotionally manipulative? Perhaps. Facile? Possibly. Heart-breaking? Undeniably. This production’s outstanding competence lay in giving its audience the opportunity to share grief and express its own, usually muted, sorrows. Shared emotion equates to shared humanity. As a fully paid-up member of Generation X, I cannot remember a more (over)dramatic outpouring of love and grief than that which we witnessed after

Hamlet’s brooding isolation is neatly updated and encapsulated in this scene.