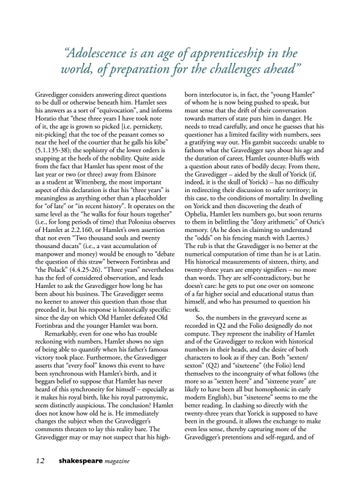 “Adolescence is an age of apprenticeship in the world, of preparation for the challenges ahead” Gravedigger considers answering direct questions to be dull or otherwise beneath him. Hamlet sees his answers as a sort of “equivocation”, and informs Horatio that “these three years I have took note of it, the age is grown so picked [i.e. pernickety, nit-picking] that the toe of the peasant comes so near the heel of the courtier that he galls his kibe” (5.1.135-38); the sophistry of the lower orders is snapping at the heels of the nobility. Quite aside from the fact that Hamlet has spent most of the last year or two (or three) away from Elsinore as a student at Wittenberg, the most important aspect of this declaration is that his “three years” is meaningless as anything other than a placeholder for “of late” or “in recent history”. It operates on the same level as the “he walks for four hours together” (i.e., for long periods of time) that Polonius observes of Hamlet at 2.2.160, or Hamlet’s own assertion that not even “Two thousand souls and twenty thousand ducats” (i.e., a vast accumulation of manpower and money) would be enough to “debate the question of this straw” between Fortinbras and “the Polack” (4.4.25-26). “Three years” nevertheless has the feel of considered observation, and leads Hamlet to ask the Gravedigger how long he has been about his business. The Gravedigger seems no keener to answer this question than those that preceded it, but his response is historically specific: since the day on which Old Hamlet defeated Old Fortinbras and the younger Hamlet was born. Remarkably, even for one who has trouble reckoning with numbers, Hamlet shows no sign of being able to quantify when his father’s famous victory took place. Furthermore, the Gravedigger asserts that “every fool” knows this event to have been synchronous with Hamlet’s birth, and it beggars belief to suppose that Hamlet has never heard of this synchroneity for himself – especially as it makes his royal birth, like his royal patronymic, seem distinctly auspicious. The conclusion? Hamlet does not know how old he is. He immediately changes the subject when the Gravedigger’s comments threaten to lay this reality bare. The Gravedigger may or may not suspect that his high-

born interlocutor is, in fact, the “young Hamlet” of whom he is now being pushed to speak, but must sense that the drift of their conversation towards matters of state puts him in danger. He needs to tread carefully, and once he guesses that his questioner has a limited facility with numbers, sees a gratifying way out. His gambit succeeds: unable to fathom what the Gravedigger says about his age and the duration of career, Hamlet counter-bluffs with a question about rates of bodily decay. From there, the Gravedigger – aided by the skull of Yorick (if, indeed, it is the skull of Yorick) – has no difficulty in redirecting their discussion to safer territory; in this case, to the conditions of mortality. In dwelling on Yorick and then discovering the death of Ophelia, Hamlet lets numbers go, but soon returns to them in belittling the “dozy arithmetic” of Osric’s memory. (As he does in claiming to understand the “odds” on his fencing match with Laertes.) The rub is that the Gravedigger is no better at the numerical computation of time than he is at Latin. His historical measurements of sixteen, thirty, and twenty-three years are empty signifiers – no more than words. They are self-contradictory, but he doesn’t care: he gets to put one over on someone of a far higher social and educational status than himself, and who has presumed to question his work. So, the numbers in the graveyard scene as recorded in Q2 and the Folio designedly do not compute. They represent the inability of Hamlet and of the Gravedigger to reckon with historical numbers in their heads, and the desire of both characters to look as if they can. Both “sexten/ sexton” (Q2) and “sixeteene” (the Folio) lend themselves to the incongruity of what follows (the more so as “sexten heere” and “sixteene yeare” are likely to have been all but homophonic in early modern English), but “sixeteene” seems to me the better reading. In clashing so directly with the twenty-three years that Yorick is supposed to have been in the ground, it allows the exchange to make even less sense, thereby capturing more of the Gravedigger’s pretentions and self-regard, and of