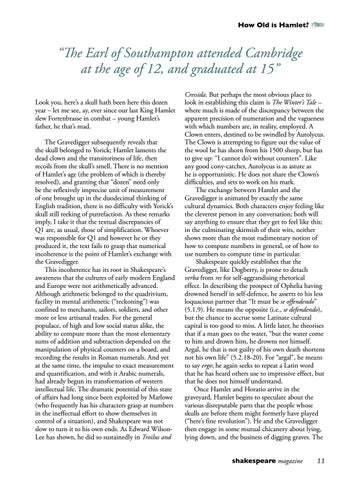 How Old is Hamlet?

“The Earl of Southampton attended Cambridge at the age of 12, and graduated at 15” Look you, here’s a skull hath been here this dozen year – let me see, ay, ever since our last King Hamlet slew Fortenbrasse in combat – young Hamlet’s father, he that’s mad. The Gravedigger subsequently reveals that the skull belonged to Yorick; Hamlet laments the dead clown and the transitoriness of life, then recoils from the skull’s smell. There is no mention of Hamlet’s age (the problem of which is thereby resolved), and granting that “dozen” need only be the reflexively imprecise unit of measurement of one brought up in the duodecimal thinking of English tradition, there is no difficulty with Yorick’s skull still reeking of putrefaction. As these remarks imply, I take it that the textual discrepancies of Q1 are, as usual, those of simplification. Whoever was responsible for Q1 and however he or they produced it, the text fails to grasp that numerical incoherence is the point of Hamlet’s exchange with the Gravedigger. This incoherence has its root in Shakespeare’s awareness that the cultures of early modern England and Europe were not arithmetically advanced. Although arithmetic belonged to the quadrivium, facility in mental arithmetic (“reckoning”) was confined to merchants, sailors, soldiers, and other more or less artisanal trades. For the general populace, of high and low social status alike, the ability to compute more than the most elementary sums of addition and subtraction depended on the manipulation of physical counters on a board, and recording the results in Roman numerals. And yet at the same time, the impulse to exact measurement and quantification, and with it Arabic numerals, had already begun its transformation of western intellectual life. The dramatic potential of this state of affairs had long since been exploited by Marlowe (who frequently has his characters grasp at numbers in the ineffectual effort to show themselves in control of a situation), and Shakespeare was not slow to turn it to his own ends. As Edward WilsonLee has shown, he did so sustainedly in Troilus and

Cressida. But perhaps the most obvious place to look in establishing this claim is The Winter’s Tale – where much is made of the discrepancy between the apparent precision of numeration and the vagueness with which numbers are, in reality, employed. A Clown enters, destined to be swindled by Autolycus. The Clown is attempting to figure out the value of the wool he has shorn from his 1500 sheep, but has to give up: “I cannot do’t without counters”. Like any good cony-catcher, Autolycus is as astute as he is opportunistic. He does not share the Clown’s difficulties, and sets to work on his mark. The exchange between Hamlet and the Gravedigger is animated by exactly the same cultural dynamics. Both characters enjoy feeling like the cleverest person in any conversation; both will say anything to ensure that they get to feel like this; in the culminating skirmish of their wits, neither shows more than the most rudimentary notion of how to compute numbers in general, or of how to use numbers to compute time in particular. Shakespeare quickly establishes that the Gravedigger, like Dogberry, is prone to detach verba from res for self-aggrandising rhetorical effect. In describing the prospect of Ophelia having drowned herself in self-defence, he asserts to his less loquacious partner that “It must be se offendendo” (5.1.9). He means the opposite (i.e., se defendendo), but the chance to accrue some Latinate cultural capital is too good to miss. A little later, he theorises that if a man goes to the water, “but the water come to him and drown him, he drowns not himself. Argal, he that is not guilty of his own death shortens not his own life” (5.2.18-20). For “argal”, he means to say ergo; he again seeks to repeat a Latin word that he has heard others use to impressive effect, but that he does not himself understand. Once Hamlet and Horatio arrive in the graveyard, Hamlet begins to speculate about the various disreputable parts that the people whose skulls are before them might formerly have played (“here’s fine revolution”). He and the Gravedigger then engage in some mutual chicanery about lying, lying down, and the business of digging graves. The shakespeare magazine