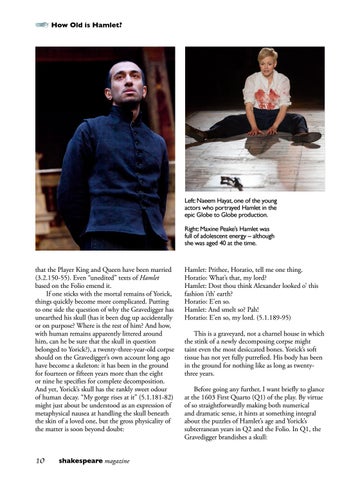 ! How Old is Hamlet?

Left: Naeem Hayat, one of the young actors who portrayed Hamlet in the epic Globe to Globe production. Right: Maxine Peake’s Hamlet was full of adolescent energy – although she was aged 40 at the time.

that the Player King and Queen have been married (3.2.150-55). Even “unedited” texts of Hamlet based on the Folio emend it. If one sticks with the mortal remains of Yorick, things quickly become more complicated. Putting to one side the question of why the Gravedigger has unearthed his skull (has it been dug up accidentally or on purpose? Where is the rest of him? And how, with human remains apparently littered around him, can he be sure that the skull in question belonged to Yorick?), a twenty-three-year-old corpse should on the Gravedigger’s own account long ago have become a skeleton: it has been in the ground for fourteen or fifteen years more than the eight or nine he specifies for complete decomposition. And yet, Yorick’s skull has the rankly sweet odour of human decay. “My gorge rises at it” (5.1.181-82) might just about be understood as an expression of metaphysical nausea at handling the skull beneath the skin of a loved one, but the gross physicality of the matter is soon beyond doubt:

Hamlet: Prithee, Horatio, tell me one thing. Horatio: What’s that, my lord? Hamlet: Dost thou think Alexander looked o’ this fashion i’th’ earth? Horatio: E’en so. Hamlet: And smelt so? Pah! Horatio: E’en so, my lord. (5.1.189-95) This is a graveyard, not a charnel house in which the stink of a newly decomposing corpse might taint even the most desiccated bones. Yorick’s soft tissue has not yet fully putrefied. His body has been in the ground for nothing like as long as twentythree years. Before going any further, I want briefly to glance at the 1603 First Quarto (Q1) of the play. By virtue of so straightforwardly making both numerical and dramatic sense, it hints at something integral about the puzzles of Hamlet’s age and Yorick’s subterranean years in Q2 and the Folio. In Q1, the Gravedigger brandishes a skull: