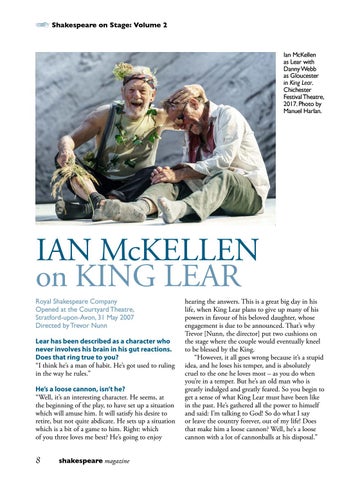 Lear has been described as a character who never involves his brain in his gut reactions. Does that ring true to you? “I think he’s a man of habit. He’s got used to ruling in the way he rules.” He’s a loose cannon, isn’t he? “Well, it’s an interesting character. He seems, at the beginning of the play, to have set up a situation which will amuse him. It will satisfy his desire to retire, but not quite abdicate. He sets up a situation which is a bit of a game to him. Right: which of you three loves me best? He’s going to enjoy

hearing the answers. This is a great big day in his life, when King Lear plans to give up many of his powers in favour of his beloved daughter, whose engagement is due to be announced. That’s why Trevor [Nunn, the director] put two cushions on the stage where the couple would eventually kneel to be blessed by the King. “However, it all goes wrong because it’s a stupid idea, and he loses his temper, and is absolutely cruel to the one he loves most – as you do when you’re in a temper. But he’s an old man who is greatly indulged and greatly feared. So you begin to get a sense of what King Lear must have been like in the past. He’s gathered all the power to himself and said: I’m talking to God! So do what I say or leave the country forever, out of my life! Does that make him a loose cannon? Well, he’s a loose cannon with a lot of cannonballs at his disposal.”

Ian McKellen is the cover star of Shakespeare Magazine Issue 13. The great man talks about the challenges of playing King Lear, while Fiona...

Ian McKellen is the cover star of Shakespeare Magazine Issue 13. The great man talks about the challenges of playing King Lear, while Fiona...