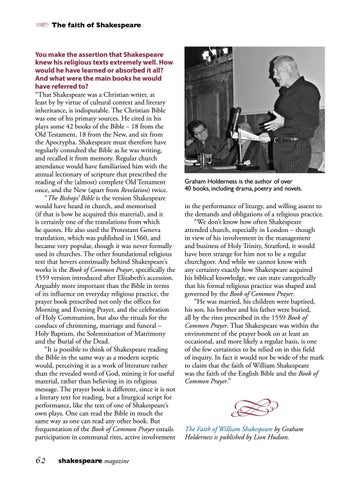 ! The faith of Shakespeare You make the assertion that Shakespeare knew his religious texts extremely well. How would he have learned or absorbed it all? And what were the main books he would have referred to? “That Shakespeare was a Christian writer, at least by by virtue of cultural context and literary inheritance, is indisputable. The Christian Bible was one of his primary sources. He cited in his plays some 42 books of the Bible – 18 from the Old Testament, 18 from the New, and six from the Apocrypha. Shakespeare must therefore have regularly consulted the Bible as he was writing, and recalled it from memory. Regular church attendance would have familiarised him with the annual lectionary of scripture that prescribed the reading of the (almost) complete Old Testament once, and the New (apart from Revelation) twice. “The Bishops’ Bible is the version Shakespeare would have heard in church, and memorised (if that is how he acquired this material), and it is certainly one of the translations from which he quotes. He also used the Protestant Geneva translation, which was published in 1560, and became very popular, though it was never formally used in churches. The other foundational religious text that hovers continually behind Shakespeare’s works is the Book of Common Prayer, specifically the 1559 version introduced after Elizabeth’s accession. Arguably more important than the Bible in terms of its influence on everyday religious practice, the prayer book prescribed not only the offices for Morning and Evening Prayer, and the celebration of Holy Communion, but also the rituals for the conduct of christening, marriage and funeral – Holy Baptism, the Solemnisation of Matrimony and the Burial of the Dead. “It is possible to think of Shakespeare reading the Bible in the same way as a modern sceptic would, perceiving it as a work of literature rather than the revealed word of God, mining it for useful material, rather than believing in its religious message. The prayer book is different, since it is not a literary text for reading, but a liturgical script for performance, like the text of one of Shakespeare’s own plays. One can read the Bible in much the same way as one can read any other book. But frequentation of the Book of Common Prayer entails participation in communal rites, active involvement

Graham Holderness is the author of over 40 books, including drama, poetry and novels.

in the performance of liturgy, and willing assent to the demands and obligations of a religious practice. “We don’t know how often Shakespeare attended church, especially in London – though in view of his involvement in the management and business of Holy Trinity, Stratford, it would have been strange for him not to be a regular churchgoer. And while we cannot know with any certainty exactly how Shakespeare acquired his biblical knowledge, we can state categorically that his formal religious practice was shaped and governed by the Book of Common Prayer. “He was married, his children were baptised, his son, his brother and his father were buried, all by the rites prescribed in the 1559 Book of Common Prayer. That Shakespeare was within the environment of the prayer book on at least an occasional, and more likely a regular basis, is one of the few certainties to be relied on in this field of inquiry. In fact it would not be wide of the mark to claim that the faith of William Shakespeare was the faith of the English Bible and the Book of Common Prayer.”

The Faith of William Shakespeare by Graham Holderness is published by Lion Hudson.