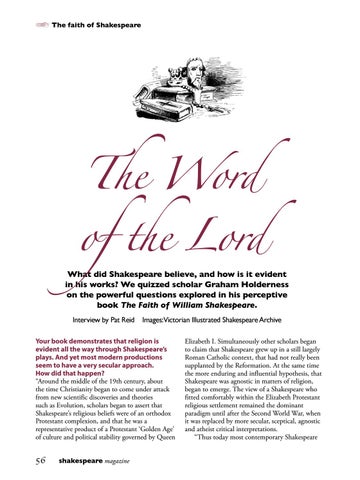 ! The faith of Shakespeare

What did Shakespeare believe, and how is it evident in his works? We quizzed scholar Graham Holderness on the powerful questions explored in his perceptive book The Faith of William Shakespeare. Interview by Pat Reid

Your book demonstrates that religion is evident all the way through Shakespeare’s plays. And yet most modern productions seem to have a very secular approach. How did that happen? “Around the middle of the 19th century, about the time Christianity began to come under attack from new scientific discoveries and theories such as Evolution, scholars began to assert that Shakespeare’s religious beliefs were of an orthodox Protestant complexion, and that he was a representative product of a Protestant ‘Golden Age’ of culture and political stability governed by Queen

Elizabeth I. Simultaneously other scholars began to claim that Shakespeare grew up in a still largely Roman Catholic context, that had not really been supplanted by the Reformation. At the same time the more enduring and influential hypothesis, that Shakespeare was agnostic in matters of religion, began to emerge. The view of a Shakespeare who fitted comfortably within the Elizabeth Protestant religious settlement remained the dominant paradigm until after the Second World War, when it was replaced by more secular, sceptical, agnostic and atheist critical interpretations. “Thus today most contemporary Shakespeare