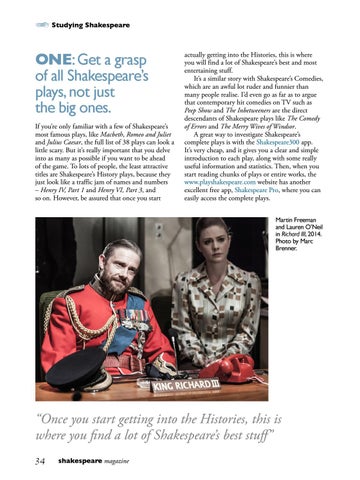 ONE: Get a grasp of all Shakespeare’s plays, not just the big ones. If you’re only familiar with a few of Shakespeare’s most famous plays, like Macbeth, Romeo and Juliet and Julius Caesar, the full list of 38 plays can look a little scary. But it’s really important that you delve into as many as possible if you want to be ahead of the game. To lots of people, the least attractive titles are Shakespeare’s History plays, because they just look like a traffic jam of names and numbers – Henry IV, Part 1 and Henry VI, Part 3, and so on. However, be assured that once you start

actually getting into the Histories, this is where you will find a lot of Shakespeare’s best and most entertaining stuff. It’s a similar story with Shakespeare’s Comedies, which are an awful lot ruder and funnier than many people realise. I’d even go as far as to argue that contemporary hit comedies on TV such as Peep Show and The Inbetweeners are the direct descendants of Shakespeare plays like The Comedy of Errors and The Merry Wives of Windsor. A great way to investigate Shakespeare’s complete plays is with the Shakespeare300 app. It’s very cheap, and it gives you a clear and simple introduction to each play, along with some really useful information and statistics. Then, when you start reading chunks of plays or entire works, the www.playshakespeare.com website has another excellent free app, Shakespeare Pro, where you can easily access the complete plays. Martin Freeman and Lauren O’Neil in Richard III, 2014. Photo by Marc Brenner.

“Once you start getting into the Histories, this is where you find a lot of Shakespeare’s best stuff” 34