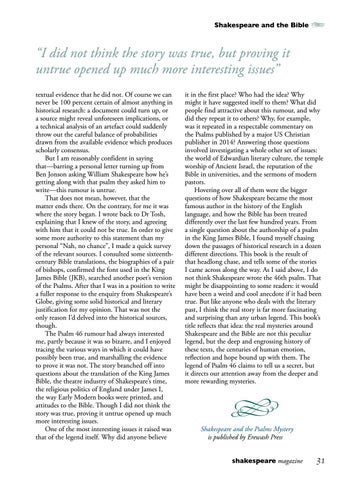 Shakespeare and the Bible

“I did not think the story was true, but proving it untrue opened up much more interesting issues” textual evidence that he did not. Of course we can never be 100 percent certain of almost anything in historical research: a document could turn up, or a source might reveal unforeseen implications, or a technical analysis of an artefact could suddenly throw out the careful balance of probabilities drawn from the available evidence which produces scholarly consensus. But I am reasonably confident in saying that—barring a personal letter turning up from Ben Jonson asking William Shakespeare how he’s getting along with that psalm they asked him to write—this rumour is untrue. That does not mean, however, that the matter ends there. On the contrary, for me it was where the story began. I wrote back to Dr Tosh, explaining that I knew of the story, and agreeing with him that it could not be true. In order to give some more authority to this statement than my personal “Nah, no chance”, I made a quick survey of the relevant sources. I consulted some sixteenthcentury Bible translations, the biographies of a pair of bishops, confirmed the font used in the King James Bible (JKB), searched another poet’s version of the Psalms. After that I was in a position to write a fuller response to the enquiry from Shakespeare’s Globe, giving some solid historical and literary justification for my opinion. That was not the only reason I’d delved into the historical sources, though. The Psalm 46 rumour had always interested me, partly because it was so bizarre, and I enjoyed tracing the various ways in which it could have possibly been true, and marshalling the evidence to prove it was not. The story branched off into questions about the translation of the King James Bible, the theatre industry of Shakespeare’s time, the religious politics of England under James I, the way Early Modern books were printed, and attitudes to the Bible. Though I did not think the story was true, proving it untrue opened up much more interesting issues. One of the most interesting issues it raised was that of the legend itself. Why did anyone believe

it in the first place? Who had the idea? Why might it have suggested itself to them? What did people find attractive about this rumour, and why did they repeat it to others? Why, for example, was it repeated in a respectable commentary on the Psalms published by a major US Christian publisher in 2014? Answering those questions involved investigating a whole other set of issues: the world of Edwardian literary culture, the temple worship of Ancient Israel, the reputation of the Bible in universities, and the sermons of modern pastors. Hovering over all of them were the bigger questions of how Shakespeare became the most famous author in the history of the English language, and how the Bible has been treated differently over the last few hundred years. From a single question about the authorship of a psalm in the King James Bible, I found myself chasing down the passages of historical research in a dozen different directions. This book is the result of that headlong chase, and tells some of the stories I came across along the way. As I said above, I do not think Shakespeare wrote the 46th psalm. That might be disappointing to some readers: it would have been a weird and cool anecdote if it had been true. But like anyone who deals with the literary past, I think the real story is far more fascinating and surprising than any urban legend. This book’s title reflects that idea: the real mysteries around Shakespeare and the Bible are not this peculiar legend, but the deep and engrossing history of these texts, the centuries of human emotion, reflection and hope bound up with them. The legend of Psalm 46 claims to tell us a secret, but it directs our attention away from the deeper and more rewarding mysteries.