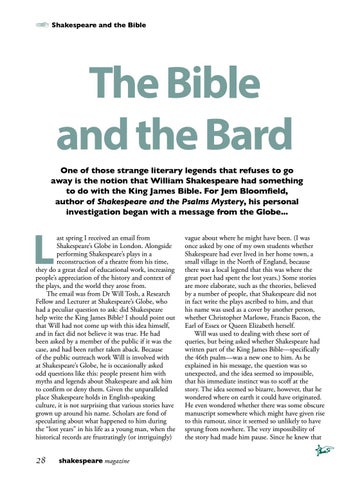 ! Shakespeare and the Bible

The Bible and the Bard One of those strange literary legends that refuses to go away is the notion that William Shakespeare had something XS HS [MXL XLI /MRK .EQIW &amp;MFPI *SV .IQ &amp;PSSQ½IPH author of Shakespeare and the Psalms Mystery LMW TIVWSREP investigation began with a message from the Globe...

ast spring I received an email from Shakespeare’s Globe in London. Alongside performing Shakespeare’s plays in a reconstruction of a theatre from his time, they do a great deal of educational work, increasing people’s appreciation of the history and context of the plays, and the world they arose from. The email was from Dr Will Tosh, a Research Fellow and Lecturer at Shakespeare’s Globe, who had a peculiar question to ask: did Shakespeare help write the King James Bible? I should point out that Will had not come up with this idea himself, and in fact did not believe it was true. He had been asked by a member of the public if it was the case, and had been rather taken aback. Because of the public outreach work Will is involved with at Shakespeare’s Globe, he is occasionally asked odd questions like this: people present him with myths and legends about Shakespeare and ask him to confirm or deny them. Given the unparalleled place Shakespeare holds in English-speaking culture, it is not surprising that various stories have grown up around his name. Scholars are fond of speculating about what happened to him during the “lost years” in his life as a young man, when the historical records are frustratingly (or intriguingly)

vague about where he might have been. (I was once asked by one of my own students whether Shakespeare had ever lived in her home town, a small village in the North of England, because there was a local legend that this was where the great poet had spent the lost years.) Some stories are more elaborate, such as the theories, believed by a number of people, that Shakespeare did not in fact write the plays ascribed to him, and that his name was used as a cover by another person, whether Christopher Marlowe, Francis Bacon, the Earl of Essex or Queen Elizabeth herself. Will was used to dealing with these sort of queries, but being asked whether Shakespeare had written part of the King James Bible—specifically the 46th psalm—was a new one to him. As he explained in his message, the question was so unexpected, and the idea seemed so impossible, that his immediate instinct was to scoff at the story. The idea seemed so bizarre, however, that he wondered where on earth it could have originated. He even wondered whether there was some obscure manuscript somewhere which might have given rise to this rumour, since it seemed so unlikely to have sprung from nowhere. The very impossibility of the story had made him pause. Since he knew that