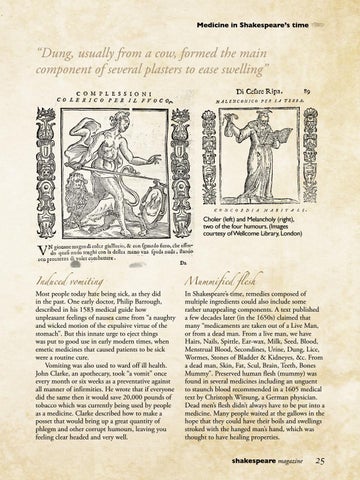 “Dung, usually from a cow, formed the main component of several plasters to ease swelling”

Most people today hate being sick, as they did in the past. One early doctor, Philip Barrough, described in his 1583 medical guide how unpleasant feelings of nausea came from “a naughty and wicked motion of the expulsive virtue of the stomach”. But this innate urge to eject things was put to good use in early modern times, when emetic medicines that caused patients to be sick were a routine cure. Vomiting was also used to ward off ill health. John Clarke, an apothecary, took “a vomit” once every month or six weeks as a preventative against all manner of infirmities. He wrote that if everyone did the same then it would save 20,000 pounds of tobacco which was currently being used by people as a medicine. Clarke described how to make a posset that would bring up a great quantity of phlegm and other corrupt humours, leaving you feeling clear headed and very well.

In Shakespeare’s time, remedies composed of multiple ingredients could also include some rather unappealing components. A text published a few decades later (in the 1650s) claimed that many “medicaments are taken out of a Live Man, or from a dead man. From a live man, we have Hairs, Nails, Spittle, Ear-wax, Milk, Seed, Blood, Menstrual Blood, Secondines, Urine, Dung, Lice, Wormes, Stones of Bladder &amp; Kidneyes, &amp;c. From a dead man, Skin, Fat, Scul, Brain, Teeth, Bones Mummy”. Preserved human flesh (mummy) was found in several medicines including an unguent to staunch blood recommended in a 1605 medical text by Christoph Wirsung, a German physician. Dead men’s flesh didn’t always have to be put into a medicine. Many people waited at the gallows in the hope that they could have their boils and swellings stroked with the hanged man’s hand, which was thought to have healing properties. shakespeare magazine