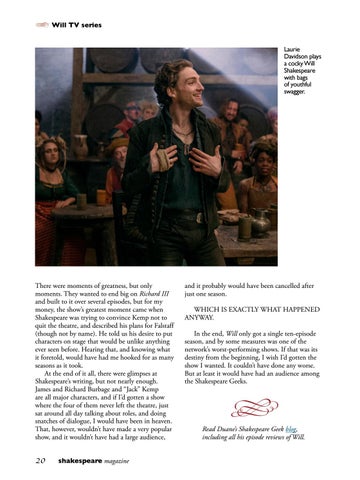 ! Will TV series Laurie Davidson plays a cocky Will Shakespeare with bags of youthful swagger.

There were moments of greatness, but only moments. They wanted to end big on Richard III and built to it over several episodes, but for my money, the show’s greatest moment came when Shakespeare was trying to convince Kemp not to quit the theatre, and described his plans for Falstaff (though not by name). He told us his desire to put characters on stage that would be unlike anything ever seen before. Hearing that, and knowing what it foretold, would have had me hooked for as many seasons as it took. At the end of it all, there were glimpses at Shakespeare’s writing, but not nearly enough. James and Richard Burbage and “Jack” Kemp are all major characters, and if I’d gotten a show where the four of them never left the theatre, just sat around all day talking about roles, and doing snatches of dialogue, I would have been in heaven. That, however, wouldn’t have made a very popular show, and it wouldn’t have had a large audience,

and it probably would have been cancelled after just one season. WHICH IS EXACTLY WHAT HAPPENED ANYWAY. In the end, Will only got a single ten-episode season, and by some measures was one of the network’s worst-performing shows. If that was its destiny from the beginning, I wish I’d gotten the show I wanted. It couldn’t have done any worse. But at least it would have had an audience among the Shakespeare Geeks.

Read Duane’s Shakespeare Geek blog, including all his episode reviews of Will.